A Touch of Tish 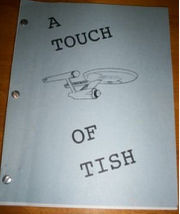 A Touch of Tish is a slash 123-page K/S anthology of Star Trek: TOS fiction by Tish.

From Bill Hupe: "An anthology of K/S stories and poems by Tish, containing some that are reprints; the balance is all new stories. "You called me freak. Of all the words you could have chosen, that was the cruelest, most hurtful of them all... The Vulcan in me understands why you had to do it... but the Human in me is crying..."

See reactions and reviews for A Moment in Time.