You may be looking for The Perfect Mate, a K/S story by Jane Firmstone.

A Perfect Mate is a Kirk/Spock story by Anne McClean. 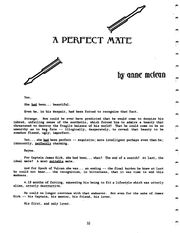 It was published in the print zine First Time #28.

"Kirkʼs inability to be faithful causes Spock to call off their affair after leaving Flintʼs planet."

This was another extremely well-written story from this new author. I thought she had Spock totally in character throughout - first falling hopelessly and helplessly for his captain, then, realising the futility of the affair, breaking it off, only to ultimately welcome his lover back. I had trouble with Ms. McClean's portrayal of Kirk. I couldn't believe that he would get Spock drunk in order to seduce him only to then deny a bond to the very monogamous Vulcan. He had to know what it would do to Spock to be in such a relationship. In my opinion, Kirk might be a bit selfish and self-centered, but he'd never be that brutal, especially to Spock. But the story was totally readable and held my attention throughout. I'm sure glad that Kirk got rid of Leila Kaloai — never could stand that woman. [1]

Anne McClean wrote just five K/S stories, and this is my second favorite. All her plotlines feature a very hard, difficult Kirk who has a bad temper, not much regard for Spock, and is selfish to boot. Somehow the author manages to make him appealing!

In this tale, Kirk becomes obsessed with Spock and seduces him by drugging him. Spock, however, is perfectly willing to continue the affair, he has such hopes...all to be dashed as time goes by. Kirk continues to sleep with other lovers, all women, never says “I love you,” he never allows himself to be penetrated, and the action always takes place in his quarters. Geez, don’t you think these are enough warning signs for Spock? But it takes the affair with Rayna to finally convince Spock that he is dying in slow pieces by continuing this hopeless situation with Kirk. He finally gets up the courage to say “This is the end,” and he also announces that he will turn his attention to finding a life-mate. And then guess who turns up on the Enterprise? Leila Kalomi, and she dresses to kill at the first night’s welcoming banquet. It’s not just Spock’s head that is turned, Kirk’s does too, only his eyes are filled with smoldering jealousy. Suddenly, he realizes what he has lost, realizes that he had never really gotten over his obsession with Spock, and by God he wasn’t going to let anybody else have him! Way back when, when I first read this story, I found it a little hard to take. This is not your typical K/S, none of Anne McClean’s stories are, and it took an adjustment of mind-set to accept this differently- characterized Kirk, his promiscuity, not to mention Spock’s apparent willingness to turn to Leila. I really do like Spock’s strength in rejecting Kirk, in turning away from their physical relationship when he really wanted to continue it. It is a hard decision to make. I also like the structure of this story. It starts with Spock’s decision to end the affair, then goes back to Kirk’s pov and his realization of his obsession, continues with the seduction, then picks up again with Spock’s pov at the tail end of the sex scene and then into his confrontation that ends the affair. The end of the story is done from Kirk’s pov, showing his desperation and loss sharply. Very nicely done, no confusion of povs, and every switch serves a definite purpose. Here’s a excerpt from the story during the seduction scene. Pretty hot! “I want you to beg me, Spock. Tell me you want me....” He moved his hips forward, exquisitely slowly. “Please...I...want you, Jim....” “Do you want me to fuck you, Spock?” He rubbed the tip of his aching penis against the prostate. Tormenting. “Uuhhnnnnn. Yes.... Yes....” “Say it.” Kirk hated himself but couldn’t resist. “Fuck...me.... Please. Jim....” The words sounded strange, unfamiliar— innocent. It didn’t matter. He shook his head. “You belong to me, Spock.” “Yes. Yes. Jim. PLEASE....”

If you haven’t discovered Anne McClean stories, I recommend them! [2]