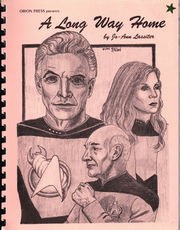 front cover by M.J. Millard, back cover is blank 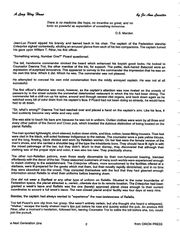 A Long Way Home is a gen 106-page Star Trek: TNG novel by Jo-Ann Lassiter. It was edited by Mindi French.

While on a backwater world, Picard and the crew of the Enterprise are startled to find Captain Walter Keel of the U.S.S. Horatio alive and well. Unfortunately, also on the planet is an enemy who is equally alive and well and still interested in the conquest of the galaxy. [1]

This zine had a long editorial by Randall Landers that was a response to some rumors he had heard:

Recently, someone told me that Pocket Books was going to shut down all Star Trek and Star Trek: The Next Generation fanzines. Another person told us that Paramount was going to sue anyone who produced a Star Trek: Deep Space Nine fanzine. The source both of those individuals cited was a Pocket Books editor, one who is actively involved in the production of the Star Trek pro-novels. They supposedly decided that fanzines violate their license with Paramount, and that we represent some sort of threat to their pocketbooks (good pun, eh?).

Well, first I was deeply pissed off. Who are these people anyway? What right do they have to shut us down? After all, Star Trek fanzines have co-existed with Bantam, Ballantine, and PocketBooks for over twenty-five years! Then, I go to thinking that these people must be absolutely crazy! A good Star Trek pro-novel will sell 200,000 to 300,000 copies. We have slightly less than a thousand readers on our mailing list They have 200 to 300 times the number of readers, and I assure you that most people who read zines also read their books. How can I be considered some sort of threat? Geez! Finally I was filled with such apathy. Let them try, I said. We've existed for as long as Star Trek has. Its creator embraced fanzines, and fanzines have helped keep the interest in Star Trek. It's a sort of mutually beneficial symbiosis. And if they want to shut us down, you'll be seeing me Oprah, and Phil, and Dave, and Montel, and Sally, and Joan, and wherever else I can go and let everyone know our side of the story.

Fanzines exist because we can tell stories that the show or the novels cannot. We can dwell on characters more than they can. They have to entertain some 25,000,000 viewers and 300,000 readers. All we have to do is entertain 1000 fans. We're no more a threat to Star Trek's licenses than we are to the man in the moon over Rigel VII. We're an alternative for those who want more than what Pocket Books is putting out. We're an outlet for those who want to develop characterization and write short stories (neither of which are on Pocket Book's agenda). We are a group of talented individuals who want to entertain others. Is that so bad a a thing? I think not.

But, right now, we're only talking about hearsay and rumors and the displeasure of a few people in high places. Does this mean that all fanzine presses are about to receive cease and desist orders? No, it doesn't. But it does frighten me, as it should frighten all fans. After all, if they shut down fanzine presses, what's doing to be next? Fan-run conventions? Filk songs? Artwork? Clubs? Yes, if they shut down fanzines, fandom will die.

So be afraid, be very afraid.