A Child Was Born

A Child Was Born is a gen Beauty and the Beast novel by Lisa Swope. 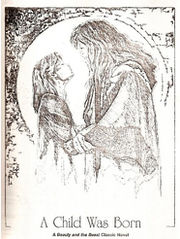 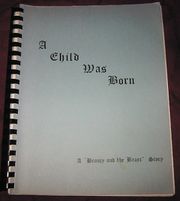 Joe assigns Catherine a case involving a research facility and, during her investigations there, she discovers the truth of Vincent's birth and his mother. Catherine reunites mother and son who then must work to establish a relationship with each other. Well-written. [1]

Genetic research. Catherine was chilled to the hean by the words staring so boldly at her from the FBI report. "'Creation Concepts" was the name f the facility. Then she saw the address. She stared at the numbers...Then scrabbled for a phone book.

"Colleen, I would like you to meet your son." He turned, seeing his son's pale face and astonished expression for the first time. Vincent's blue eyes reflected distress no less than that of the woman before him. Father reached out to capture one huge furred hand in reassurance. "Vincent, I would like to introduce you to Colleen Somerset." He tugged gentry, and Vincent obediently moved a few paces forward. His eyes remained totally fixed on the tiny stranger before him. His head cocked to one side as he recorded every detail of this woman he had longed to see for so very long. The object of his attention was not quite so pleased. Colleen stared in horror at the enormous soul before her. Even as the analytical part of her mind recorded details, her heart tried frantically to deny them. This creature was massive. He had Leslie's build, only slightly exaggerated. This monstrous being had her mother's eyes, and a wild mane of red-gold hair not too unlike her own strawberry blonde...Her baby? It hesitantly held out one great furred paw-claw-tipped, she noted - and rumbled softly. "Colleen?" No. This full-grown, adult creature couldn't be her baby. Not her sweet tiny newborn.... "Not" she gasped, backing away from the proffered hand. "No. NO!" "Colleen." Catherine grabbed her arm, trying to contain this situation gone awry. "Colleen, wait! This is Vincent!" "No!" she fairly screamed. "NONONO!" Colleen surprised Catherine with sudden strength, and managed to wrench free of her grasp. She backed away slowly, staring at her son in absolute horror.

"No...." she whispered, then turned and bolted out of the study and into the tunnel.

A novel of Vincent's birth, entwining the past with the present, until mother meets son. No space aliens, test tubes, Paracelsus, or other weird plots. Just warmth, compassion and love. Artwork by Barbara Gipson. [2]

One of the first and still the best return of Vincent's mother stories, beautifully written. V & mom's discussion/dissection of “Cyrano” is particularly acute and appealing. [3]