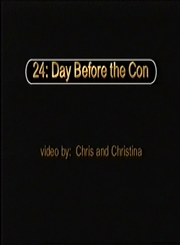 The vid, using all original footage, follows Chris and Chsitna on their daily lives before leaving to go to Mediawest, a fan run convention. As the viewer watches, it becomes clear that the two will never be able to complete their fanvid for the convention. Real life (chores, work, more chores, more work) keep getting in the way. The vid is unusual in that it contains footage of not only the vidders but also their friends and workplaces, ex: Christine works in a library.

A similar vid is Pressure made by California Crew in the 1990s.