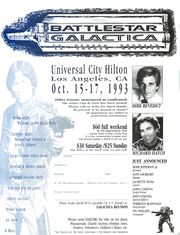 The Battlestar Galactica 15 Yahren Reunion was a fan run convention held in 1973 to celebrate the 15th anniversary of Battlestar Galactica. The convention had several actor guests including Richard Hatch and Dirk Benedict. Other events included an art/charity show and auction, a costume contest, gaming, a dealer's room and a memorabilia display area.

Proceeds from the convention were to go directly to various charities;[1] however, due to problems with the hotel, attendance was lower than expected.[2] After some pressure and bad PR, the hotel agreed to fund - for free - another charity convention, Con Rad which took place in 1995.