From Fanlore
(Redirected from Xenophon)
Jump to: navigation, search 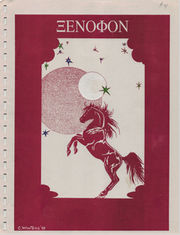 ΞΕΝΟΦΟΝ is a gen fiction 147-page anthology focusing on horses in fantasy, science fiction, and fandom. It has a lot of unicorns in it, and a slant towards furry.

Media content is War of the Worlds, Doctor Who, Rat Patrol, Star Trek: The Next Generation, Edward Scissorhands.

From the editorial by Colleen:

This 'zine has many roots. My love of horses started at the age of 3 and is the combined fault of Walter Farley's Little Black. A Pony books, and the unknown authors and artists who created the comic book Black Fury. As I grew older I progressed to the Black Stallion books, anything by Marguerite Henry, model horses, riding lessons, and finally, a horse of my own. Owning and caring for my own horse only added to my enthusiasm. Along with this craze for horses, I had been nurturing a growing addiction to Science Fiction. This started innocently enough at age 11, when the local library ran out of horse books and I started reading Tom Swift as a substitute. From Tom Swift it was an easy jump to Andre Norton, Anne McCaffrey, Ursula LeGuin, Asimov, Bradberry, and onward.

Media fandom grabbed me when I was still in undergraduate school. A friend I'd made while attending a Science Fiction class wanted to produce a Star Trek fanzine and needed an artist. I could only draw horses and dragons. Eileen didn't mind. She gave me some reference photos of Dr. McCoy and told me to draw the cover for the zine. Such an innocent start! Five years later I co-edited the zine Hiehlv Animated with my friend Jo Horvath (Jo is also the person responsible for taking me to my first S-F convention). We produced two issues before time and the need to find jobs forced us to call a halt.

A graduate degree and several years of working in the "real world" have intervened since then, but the desire to do another zine just wouldn't leave me alone. There were and are plenty of excellent media and specialty fanzines available. I wanted to produce something a bit new, something that I would buy if someone else had produced it. In May 1990,1 put out a modest flyer at Media*West Con to see if there was anyone else out there with similar interests in horses, S-F, fantasy, and fandom. What you are holding now is the most generous answer. The stories and art contained in this zine run the gamut from fannish cross-universes to the totaly original. Hopefully, there is something in here for almost any admirer of the horse to enjoy.