For other similar titles, see Wolfshead 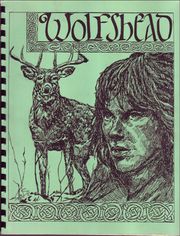 Wolfshead is a 48-page Robin of Sherwood anthology edited by Jody Lynn Nye.

It is the first Robin of Sherwood anthology. Brotherly Love, also published in 1986 was the first RoS novel. It is unknown which zine was published first.

Regarding the Implied Slash

"I expect that I will collect a lot of flak for including Teleny’s story, In’sha’llah. It seems strange to be justifying the freedom of the press, especially the amateur press, but I have published it because I think it is a good story. It is definitely what you’d call an adult situation, but I think it was handled in good taste. In’sha’llah is a speculative fiction, as is anything not broadcast in the series." -- from the editor, Jody Lynn Nye.