Within the Crystal Rose

Within the Crystal Rose is a het Beauty and the Beast anthology edited by Margaret Davis. 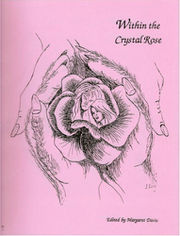 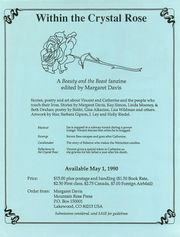 a flyer for issue #1

No 3rd season in this zine. Story lines include: Vincent rescues Joe; an alternate ending to 'TRIS'; Stephen Bass returns to torment Catherine (continued in Volume 2); Vincent helps Catherine grieve for her father; and Vincent and Catherine marry and have a child. Jenny Aronson appears also. Nice, sweet stories.[1]

A choice collection of short stories, mainly concerning Vincent's past. The series overall is Continued Classic in an alternative timeline to 3rd season. [2] 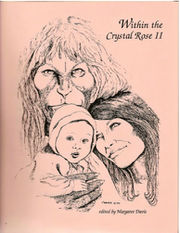 Continuing the plotlines from WCR-1. Some explore the histories of the tunnel people.[3]

This well-written collection of stories includes Part 2 of 'Revenge' and 'Wells Family Chronicles.' The latter consists of journal entries detailing the day-to-day events of life as Catherine and Vincent raise their two children. This volume also includes storylines concerning some of the Tunnel inhabitants and Vincent's childhood. [4] 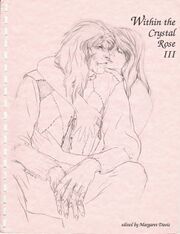 Volume 3 continues its focus on the Tunnel world and its inhabitants. Story lines include: Vincent as a child; the capture and taming of Mouse; and more 'Wells Family Chronicles.' In 'So Much for a Romantic Interlude,' Catherine discovers a drunken Vincent really can't sing![5]

Continuation of this series reaches new artistic levels. It's turning into a truly charming, must-buy series. [6] 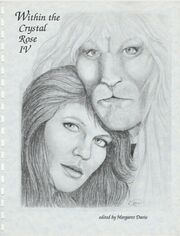 In this fourth volume of the series, several stories focus on Mouse and some original characters that impact the Tunnel world. There is also another installment o f the 'Wells Family Chronicles' and the short story, 'She Loves You,' wherein Vincent and Catherine come close to having their first fight. The Tunnels also face a crisis of the first magnitude in 'Gone' - Father runs out of tea! [7]

A pleasant mix of stories, good poetry, and vignettes, effectively illustrated by a roster of good artists. 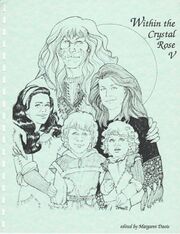 This volume offers two V-childhood stories by Stephanie Davis and Roxanne Koogler. Diana Smith and Pat Dunn, in “Voices from the Past,” offer a thoughtful, interesting frame story in which Father, severely ill, remembers moments from the tunnels' founding days. In Laura Davis' brief but strong “Dark of the Heart,” the child who shot Vincent in The Outsiders is at last integrated into the tunnel community. In Linda Mooney's “Tears,” Paracelsus' followers pose a threat even after his death (striking art for this story by Duke); in Kay Simon's “The Dark at the End of the Tunnel,” C attempts to discover who's polluting the tunnels' water supply; in “Change of Life,” V/C have some anxious moments as daughter Jenni cannot be found (striking art here from Bruce Holroyd) and C finds her life changed in a remarkable way. Vignettes by Laura Davis and Anna Gerard and another segment of the Wells Family Chronicles, this time excerpts from the diary of Jessica Caroline Wells' (V/C's adopted daughter), giving glimpses of daily life including the children's bout with “chicken pops,” and, later, V/C's diary exchanges. [9] 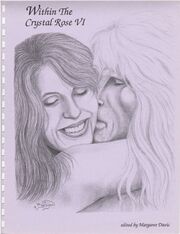 This volume offers Betty Reardon's “Frank Buck Lives,” a charming and pointed child-Vincent story of the differing perspectives of children and adults; in “Riches,” Anna Gerard recounts the adventures of Geoffrey and Samantha in replacing one of Father's books; Lisa Wildman's “Yesterday's Son,” in which C investigates the death of a man who was apparently Father's son; E. Wyllis' "A Midsummer Night,” flashes back to the celebration of V's recovery from his Trilogy illness and older memories lead to a difficult reconciliation with the past. Diana Smith and Pat Dunn, in “Be My Valentine,” chronicle Mouse's search for the perfect Valentine gifts to express his love for sweetheart Molly. Bruce Holroyd's strong and interesting “The Whispering Gallery” recounts the construction of its bridge. Another excerpt from Margaret Davis' “the Wells Family Chronicles.” Vignettes by Karen Morgia, Linda Mooney, Jackie Kapke, Roxanne Koogler, Katherine Garnett, Krystin Wilhelm, Caitlyn. [10] 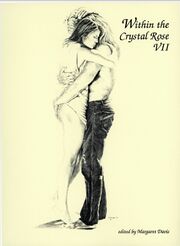 Standout story here is Becky Bain's “Little Boy Lost,” in which, coming Below, C finds a nearly mute, terrified six (or so) year-old boy, Ross, who's obviously been mistreated. C-and C alone-wins his trust and ushers this all but feral child into the care of the world Below. This longish, utterly unsentimental story is full of well observed and well invented detail, utterly convincing, and shows C/V's dedicated concern for children. Also memorable are Michele Sayles' “Brother, Mine,” an account of very young Devin's feelings of resentful neglect when newborn V takes all the adults' attention...and how Devin is reconciled to the strange foundling and makes his own special contribution. In “Against the Dying of the Light,” Roxanne Shearer Koogler offers V/C daughter Jessica's fear that Rollie's succumbing to complications of AIDS might have been her fault, because she'd gone for her piano lesson while recovering from illness, against C's specific instructions. Margaret Davis' “Abandoned In Silence” is a flashback story: as C tries to rest while V watches over her, apparently after being attacked in her apartment during “An Impossible Silence,” V helps her forget her pain by telling her (a flashback) the story of how Laura first came to them and how he learned to speak to her. “Shadow of a Beast” by Diana Smith and Pat Dunn is a bouncy tale of close friends psychic investigator Jonathan MacKensie and tabloid journalist Edgar Benedek skulking around Central Park hoping to catch sight of “the man-beast.” Instead, Jonathan is mugged, shot, and then rescued by V. Then the problem arises: what to do with this seriously ill stranger in their midst, and what to do about his persistent, shamelessly energetic friend blundering around the tunnels, looking for him. Also fiction by Linda Mooney and Katherine Garnett. There's also another installment of the Wells Family Chronicles by Margaret Davis. Poetry by Jeanne C. Peters, Katherine Garnett, and Margaret Davis. Art (unlisted, so the Q-fer apologizes if anyone's left out or misidentified) by Kerin Houseberg, Barbara G., Barbara Gipson (that Barbara G.-another lady entirely: cover and 2 pieces of interior art), Sandy Tew, K. Jacobson, Michele West, Judy Ley, Phyllis Berwick, Amy Bechtel, Holly Reidel, S. Leonard. Also several unsigned drawings.[11]

Within the Crystal Rose 8 was published in July 1994 and contains 112 pages. Cover by Barbara Gipson. Art by Shirley Leonard, Dragon, Lisa Wildman, West (?), and a couple of unidentified others.

This newest volume of this consistently enjoyable and well edited series has stories focusing more on peril and adventure than on romantic yearning. The longest story here is "The Way Below" by Diana Smith and Pat Dunn, a B&B/Kung Fu crossover in which Kwai Chang Caine and son Peter come to the Continued Classic tunnels so that the elder Caine can treat ailing Father. Peter becomes involved in a cave-in with V/C's adventuresome 5-year-old son Jacob. Some interesting parallels are drawn between Devin (who doesn't appear) and Peter, and their relationship with their fathers. Though more focused on the Kung Fu aspect than the B&B one, the story is well written and true to character. It's interesting reading despite some odd line breaks. Amethyst Hart has two stories here. Set following "Chamber Music" and the joyous rain during the concert, Hart's "Rain" is a brief, intense tale of flooding Below which catches Vincent, Catherine, and a party of children unprepared. Hart's "Song of Arion," set following "The Watcher," tells how dolphins help Catherine face her new-found dread of water due to her experience of drowning in that episode. Another story of danger and escape, Becky Bain's "The Choice" sets Vincent the task of leading Catherine, Father and some children to safety through an unexplored passage and across a dangerous ledge when flood threatens. The choice Vincent is presented with, and how he makes that choice, is the basis of a strongly dramatic and insightful story. Katherine Garnett's anecdote, "Past and Forever," affirms the possibility of finding true love, even for middle-aged storytellers. The zine concludes with Davis' "Never Ready," a Continued Classic tale in which Father is seriously ill and Catherine offers Vincent emotional support against the spectre of possible loss. Poetry by Amethyst Hart, Dragon, and MariLynn. Cover by Barbara Gipson. Art by Shirley Leonard, Dragon, Lisa Wildman, West (?), and a couple of unidentified others whose names the reviewer apologizes for being unable to decipher. [12]