The Wincestiel Big Bang was a big bang challenge in Supernatural fandom focused on the poly pairing of Castiel/Dean Winchester/Sam Winchester, also known as Wincestiel. Authors had to write a story with a minimum of 15,000 words, artists had to create two pieces of art that could include, a book cover, a banner greater than 500x500px, a fanmix with album/track cover art, a fanvid of more than a minute in length or a sketch or painting at least as big as a normal sheet of paper.

The Painted Horse
Writer: xsnappapplex
Artist/Beta: syccas
Genre: Supernatural AU (Millionaire, Mechanic, Undergrad)
Pairing(s): (Wincestiel) Cas/Dean/Sam
Rating: NC-17
Word Count: 55,748
Warnings: Casual/habitual drug use (non graphic), moderate violence, exhibitionism, (mild) masochism, rimming, frottage, comeplay, incest, barebacking, piercing, top/bottom switching, pain!kink.
Summary: Castiel sees the world in vibrant color, Sam is looking to belong and Dean is a born-ready cynic. Between them forms a cautious and unlikely family, complementary to the core. As Castiel carefully guides their shared but flawed relationship, he discovers the bonds that tie are more familial than they ever suspected. When everything comes crumbling down, Sam realizes the brother he’s tried his whole life to find and the one Dean tried to forget are one in the same.

Kneeling Gods
Writer: dc_derringer
Artist/Beta: xsnappapplex
Genre: Canon Compliant
Pairing(s): Wincestiel – with scenes of Wincest, Destiel, and Sassy
Rating: NC-17
Word Count: 20,000
Warnings: Angst, Dub-con (due to altered state of consciousness), mention of weecest, double penetration, collaring
Summary: With Castiel proclaiming himself God, Sam and Dean must resort to a drastic binding spell that requires them to have sex with Castiel every day to keep him under control. 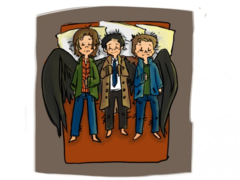 Art by pro-kira for the story Something Worth Protecting

Something Worth Protecting
Writer: winnywriter
Artist: pro_kira
Beta: terrorinyertub
Genres: AU season 4, Adventur
Pairings: Gen Wincestiel with hints of destiel and sastiel along the way.
Rating: PG-13
Word Count ~40,000
Warnings: Language, some violence, minor depictions of Hell, religious content.
Summary: Castiel was charged with being guardian angel to the Winchester brothers at the time of their birth, and when Dean is sent to Hell, bound by a demonic contract, Castiel pulls him out. But another, rogue guardian angel has rebelled against his brothers and the Host and is stealing the human charges from other guardians to make himself powerful beyond belief, and he takes Dean. Castiel and Sam - though their own guardian angel bond was broken when Sam was young - must journey to Heaven to rescue Dean and stop the rogue angel from destroying the Host and humankind alike.

CollegeAngels.Com
Writer: tiptoe39
Artist: dazedrose
Genres: AU, Porn, Angst, Romance
Rating: NC-17
Word Count: ~30,000
Warnings: Incest, lots and lots of sex, NSFW art, brief non-penetrative underage (age 14) sexual activity
Summary: AU. Dean and Sam have always been a little too close, and Dean knows it's wrong—so he heads to college, hoping that he'll meet someone there who will keep his mind off his little brother. He meets Castiel, who has a business proposal for him --- join Cas in bed, and online, for live webcam site CollegeAngels.com. Through Castiel, Dean learns about sex, kink, and freedom, and he finally feels pride instead of shame for who he is. But then Sam gets accepted to the same school, and he wants to live with Dean...

The Monsters That Kill the Nightmares
Writer: hpautumngrl
Artist: terrorinyertub
Genres: Horror, Smut, AU
Rating: NC-17
Word Count: ~20,000
Warnings: Bloodplay, Serial Killer AU, Knifeplay, Comeplay, mentions of rape/non-con, gratuitous porn,
Summary: Somewhere between the roadtrips cramped in the car and the monsters they'd kill to pretend they were doing something good, Sam and Dean fell in love with killing... other things. And then they tried to stop. Somewhere between running from the cops and running from the family who'd abused him as a child, Cas fell in love with creatures even darker than him. Apart, they're broken, scared, not entirely sane. But together, they may just save each other from the things that keep them up at night. 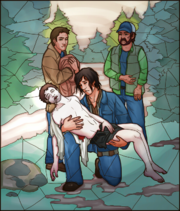 Art by badbastion for the story Beneath Every Layer of Skin. The configuration of the figures is similar to Pieta a subject found in traditional christian art

Cut Your Teeth
Author: saltandbyrne
Artist: delugedpapercup
Betas: fobsessed54 and dc_derringer. Any remaining mistakes are squarely on my shoulders.
Pairings: Dean/Sam, Dean/Sam/Castiel, Castiel/Meg (non-graphic)
Rating: NC-17
Word Count: ~26,000
Warnings/Enticements: werewolves, multiple character deaths (not Sam, Dean or Castiel), show-level violence and torture, hurt/comfort, bondage, wincest, mild breathplay, threesome, mild D/s undertones, explicit sex, felching, top Dean, bottom Sam, bottom Cas.
Summary: AU after “Heart.” Madison leaves Sam with a parting gift that will change his and Dean's lives forever. Sam isn't the only one suffering from a new set of animal urges. As they criss-cross the country in search of a cure, the brothers find comfort where they never would have looked before. Castiel is a lone wolf, mourning the death of his mate and searching for a new pack. When fate brings them together, all three will learn that sometimes family isn't who you choose, but what you choose to become.

Hope's Last Breath
Writer: backrose_17
Pairings/Characters Dean/Sam/Castiel, Jack/Ianto, Coulson/Clint, Tony/Bruce, Natasha/Pepper, Thor/Loki, Steve/Darcy, Balthazar/Gareth Jones, Bobby, Marion Jones (OFC), Andy/Tosh, Owen/Maria Hill, Nick Fury/Donna Noble, Rhys Williams/Kathy Swanson, Martha Jones, the Doctor
Genres: Romance, Action, Myth
Rating: R
Word Count 31,000
Summary: Greek Mythology says that when Pandora disobeyed the Gods and opened the box, all the world's evil was unleashed but hoped remained inside. Unfortunately, hate found Pandora's Box and destroyed it. Out of his depth, Nick Fury has no choice but to seek help from others who have knowledge of and experience with this kind of stuff. But without hope in the world, it's only a matter of time before humanity falls into chaos.

The Crumbling Difference (Between Wrong and Right)
Writer: cherie_morte
Artist: evian_fork
Genres: Curtain fic?
Rating: NC-17
Word Count: 16,000
Warnings: explicit sexual content, soulbonding, alcohol use, and language
Summary: AU after 5x22: Tired of seeing Dean trying to live without his brother, Castiel decides to do what he can to bring Sam back. Raising Sam creates a bond between the three of them that follows Castiel to Heaven, linking him to Sam and Dean whether he wants to feel them or not. The Winchester brothers decide to settle down and rebuild a haunted house, making sure that Castiel knows he has a home there if he wants it. But while Castiel wants nothing more than to fall again and join them, his duty keeps him in Heaven, fighting a civil war for a place he no longer feels at home in.