Who Says Truth is Stranger Than Fiction?

Who Says Truth is Stranger Than Fiction? is a gen crossover Simon and Simon and Hardcastle and McCormick 122-page novel by Rowena Warner. 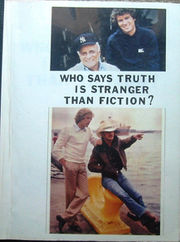 Rick and AJ Simon's mother, Cecelia, has met and fallen for Judge Hardcastle, but when the younger men are added to the mix, things get a little hot: Milt thinks the world of A.J. because he's well-dressed and well-spoken, while he thinks Rick is a lazy bum who constantly makes A.J. break the law in their profession as private eyes. Meanwhile, Mark McCormick thinks Rick is a funny, inventive guy who's got a million stories to tell, but thinks A.J. is a stuffy, prudish horse's ass who's sucking up to the judge. Tempers and more fly when these four men are forced to work together to solve a case, but it's a toss-up whether they find out whodunnit before someone gets done in! [1]

The Lone Ranger and Tonto go to San Diego on business, and become entangled with The Hardy Boys. Yep, the story is as strange as it seems. Milt and Rick don't get along, and Mark and A.J don't get along, but Milt thinks Mark could take a few lessons from A.J. and A.J. thinks Rick could learn some things from the Judge, but Rick takes Mark under his wing and they go out drinking together. Confusing, right? You got it. [2]

This crossover story (Simon and Simon with Hardcastle and McCormick) is really very readable. Mark and the Judge come down to San Diego in pursuit of someone they really plan to seek retribution from (no, I won't tell you why) and meet up with - guess who? Yes, Cecilia, who invites them home for a meal, at which they meet her sons. There's a fair bit of professional jealousy between the two pairs, plus the fact that Rick and A.J. get very worried about Hardcastle's intentions towards their mother.

The two groups do in fact almost pair off differently. Rick with McCormick and Hardcastle with A.J. - well, for part of the time, anyway, and after the involvement of the local law, the obligatory chase, shootout and injuries, everything works out to a satisfactory conclusion.

The storyline is quite good (there is a plot!) and works pretty well on the whole, although some of the characters don't remain in character when talking all the time. But, though not a rabid fan of either series, I really enjoyed reading this story and would recommend it to anyone who likes a good, well-put-together story. [3]