Wayfarers is a gen Star Trek: Voyager anthology fanzine published by Orion Press. It is digest-sized, and ran for four issues. Brenda Shaffer-Shiring was the editor. The first issue is full size and the other three are digest-sized. 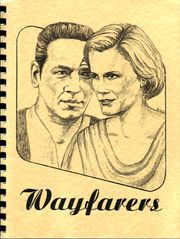 Wayfarers 1 was published in January 1999 and contains 224 pages. Art credits go to Joey Rodrigues and to Anja Gruber, who supplied a Chakotay and Kathryn drawing for the cover.

The long-awaited, much-delayed "relationships" fanzine series has finally arrived! I find it interesting that this fanzine exists, in this form, in the first place. ORION PRESS offers other 'second series' fanzines for each television program which publishes darker material. I'm surprised that they chose not to have one for ST:VOY, allowing a separate forum for the "tortured Pilot", "angry Warrior", "depressed Engineer", and "Starfleet vs. Maquis" stories. Especially with the abundance of "tortured Pilot" and "angry Warrior" stories out there. The relationship stories could easily be merged into Delta Quadrant, since that series has already printed such stories on a regular basis.... In "Out of the Ashes", Andra Marie Mueller returned to her beloved Alternate Universe. In this place, Janeway survived the final engagement with the Krenim ship from the episode "A Year in Hell, Part 2" and time did not reset itself. As the crew limps along home, dealing with their losses, Janeway and Chakotay have a new life together. A plus for this story was that it was the first time in the AU that the captain maintained her strength and 'command' - as opposed to becoming all weepy and mushy and 'girly'. The story wasn't gripping and edge-of-your-seat, but it was very nice because of how Janeway was handled. "New Resolutions" by Diane Bellomo takes place after Janeway received her "Dear John [Jane?]" letter. Our captain remembers and compares moments with Mark on Earth and moments with Chakotay on New Earth and realizes that she's been unfair to herself and her first officer. This was a really nice story, not so much for the ending, in which the reader knew the two would get together (it is J/C, after all! duh!), but for the cutting room floor scenes between J and C on New Earth. They were really well-written, in character for the most part, and were romantic. "Shadows" by Andra Marie Mueller was a quiet, touching J/C story. Janeway and Chakotay examined their meaning to one another after she found him reflecting on the incidents in "Nemesis". Fan fiction writer extraordinaire, BEKi usually writes Chakotay stories or Paris stories for ST:VOY and even then, the 'other' character has some important placement in the story. "A Man Alone" by BEKi, a short novella, features both characters, and their respective others. In the episode "One", Seven of Nine spent some of her time returning Paris to his stasis chamber. It was determined that he was claustrophobic. BEKi chose to explore that claustrophobia. The story involved Chakotay acting as a 'counselor' to help Paris come to terms with it, where and why it started, and learning to deal with it. Not only is the author capable of writing believable dialogue, including arguments, but I swear that he/she provides the best Janeway and Chakotay conversations out there. This was a wonderful and wonderfully well-written story in that the impetus 'situation' didn't detract from the scenes with the couples, nor did it seem disconnected. BEKi has a great gift - excellent character development - that makes the reader able to sink into her world and get attached to these "people" who we thought we knew. "A Friend in Need" by Valerie De Vries was of the "tortured Pilot" variety starring Paris and the Doctor. The story was very, very good, mainly due to the emotions that the circumstances engendered. However, it's those circumstances that made the story need to stretch a bit to reach the fanzine's relationship theme. Be aware that it had serious subject matter. "The Gift" by Kathleen Speck was a Kim story. A member of the crew helped Harry beat Tom at pool and in the process they fell for one another. I hate to say it, because it seems so trite, but the story was, well, sweet. I liked it; it was a perfect Kim story. He' s a sweet guy and he rated a sweet story. The absolute gem of the fanzine was the closing story, "One Night in the Captain's Cabin" by Brenda Shaffer-Shiring. The story was too short to give a synopsis, and giving such would also interfere with why this was such a great[!] story and worked as the fanzine's capper. Art credits go to Joey Rodrigues and to Anja Gruber, who supplied a Chakotay and Kathryn drawing for the cover. [1] 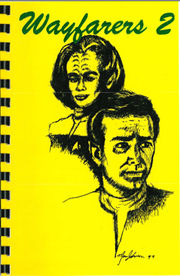 cover of issue #2, by Marc Johnson

Wayfarers 2 was published in October 1999 and is 132 pages long. The art is by Marc Johnson and Joey.

WAYFARERS 2 will ready in October. We've already received two major submissions for this zine. One of these lengthy stories is from Maddie Mumford: Paris is injured on a primitive planet, and Kes must tend him; in the process, they tentatively explore their feelings for one another. There's also an alternate-universe story from Thea Bradley (whose first ORION PRESS story will run in the next issue of DELTA QUADRANT) in which Seska and Suder--who are, in this universe, innocent victims--hope to use the Krenim technology to gain revenge on their tormentor: a sadistic Chakotay. When one reads the description, one doesn't think that the story would be suitable for WAYFARERS, but on reading the story, one finds that it actually fits in pretty well. Send submissions to: Brenda Shaffer-Shiring [postal address redacted]. Sorry, no email address yet. [2] 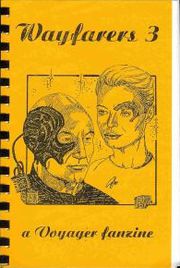 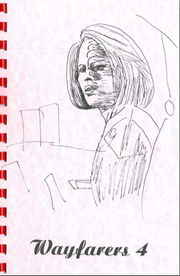 cover of issue #4 by Joey Rodrigues

Wayfarers 4 was published in October 2000 and is 112 pages long. Cover by Joey Rodrigues.