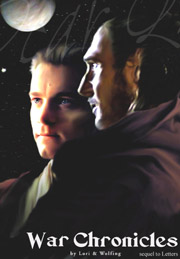 War Chronicles is a Qui-Gon/Obi-Wan slash novel by Lori and Wolfling. It has a word count of 208,000 words and is part of the Letters series.

The story was published online in 50 parts and later cleaned up and re-edited for zine publication. The zine has either 350-pages or 260-pages and a color cover by X.

Last year, about this time if I recall correctly, we started posting 'Letters' which ended up finishing in December. (Can be found at http://www.hawksong.com) This is the sequel to that story that we've been working on, off and on since then. There is also an alternative universe (to the AU, yes we know we're wierd) to that story called Foursome but that isn't posting here and never will. The story order goes Letters (Foursome) War Chronicles. You don't have to have read anything before now to understand most of it, but obviously parts will make more sense if you have.

To sum up, Qui-Gon and Obi-Wan lived through the events of 'The Phantom Menace' but hadn't gotten together at the start of the story. Over the course of a year letters are exchange, people meet, and in general, life happens to them and the people around them. This story picks up several months after 'Letters' finishes.

In the time honored tradition we seem to have started, in addition to the huge length of the story in question we are posting a part a day. The story is *finished*. This is not a Work in Progress. It is, however, a serial.[1]

From One of the Authors

War Chronicles was the last of the series to get zined. The cover was supposed to be Suzan Lovett - Beloved Padawan [2] but it's the wrong orientation for a zine cover and I re-used X's art for the print version. I did use Suzan's print as interior art. The loopy text on the cover was X's idea and a callback to the 'Letters' handwritten letter idea. After War Chronicles came out I was done with being a zine publisher and gave the reprint rights to AWIT press so they could stay 'in print'. Letters was exceptionally heavy to ship and expensive to print. That, as well as the rise of online archives and faster modem speeds led to the stories going out of 'print' but the PDFs were always available online and are a duplicate of the text that was in the zines. [3]