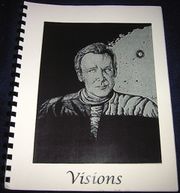 A certain Vulcan said, some time ago, "There are always possibilities." Episodes like TNG's "Parallels" showed that the number of possibilities for any given group of people just might be infinite. Thus the introduction of a new Voyager fanzine that hopes to explore some of those possibilities for the crew of Starfleet's most far-ranging ship. Visions, a one-shot fanzine edited by Brenda Shaffer-Shiring (Maquis, Wayfarers), will be an all alternative-universe fanzine, looking at the way things might have been, or might be, if...

Chakotay's ship never went into the Delta Quadrant. Or the combined crews ended up on the Maquis ship instead of Voyager. Or Seska was a hero and Chakotay a villain. Or Janeway and Chakotay stayed on New Earth. Or Paris and Torres mated during "Blood Fever." Or Kes never became the "starchild." Or the crew was stuck in the 20th century (post-"Future's End"). Or in the "Year of Hell" timeline. Or in the Mirror Universe. Or in the timeline shown in "Before and After." Et any number of ceteras!

With a couple of submissions already under our belt, including a moving Janeway/Chakotay scenario by Cat Lain, we're looking to publishing June or October 1999. [1]

From the publisher: "Injured in an accident while trying to do his friends a favor, Tom Paris must face the fact that he may spend the rest of his life sightless. How does the pilot cope with this? How does this affect his friends?"