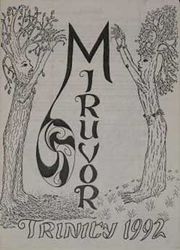 Victoria Clare is a British writer and artist who was editor of the fanzine Miruvor of Taruithorn, the Oxford Tolkien Society 1993-1994. She dropped out of fandom around 1995, but began writing fanfic and participating in Rosemary Sutcliff fandom in 2011 after watching The Eagle movie.

In 2015 she began playing in what was to be a long-running Silmarillion tabletop roleplaying game as an original character Fëanorian smith, Angruin, and soon after began writing Silmarillion fanfic and creating Silmarillion-inspired art. Her story Quenta Narquelion was begun to provide backstory for Angruin, but quickly outgrew the idea and became a much larger scale project focussed on canon characters.

In 2016 she completed a project with the help of Jenny Read and Rina Blackcat to produce an English translation of the 2001 Russian Silmarillion musical Finrod's Song.