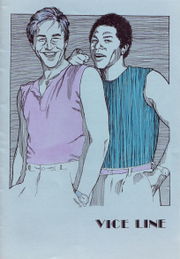 cover art is not credited by the editor. Artist signature illegible. 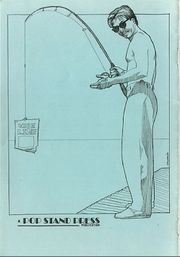 Vice Line is a 5-page single-issue letterzine published in very early 1985. Its creator, Marie Antoine, received a cease and desist letter from the producers of the show, something she wrote about in the November 1985 issue of her fanwork, The Pop Stand Express.

From an ad in Between Friends #8 (March 1985): "You demanded it, and now it's here! We're talking serious episode discussion, characterization, and how Miami Vice reflects and influences what we expect from TV. Bi-monthly starting April. $1 per issue."

I was the editor of a small letterzine called 'Vice Line,' which managed to publish 1 issue before being hit with fandom's greatest horror, the dreaded Cease and Desist notice. Receiving it was particularly painful for me, as I had just spent 8 months moving heaven and earth to keep 'Miami Vice' from being cancelled, and while I didn't expect the producers to throw roses at my feet, I didn't expect this either. Within days of its debut, the zine was folded, subs refunded, and plans for future fannish endeavors thrown into limbo. The experience left me drained, disillusioned, and angry about the massive amount of waste of time, energy and spirit, of all the people who had worked so hard for so long. I vowed I would never again lift a finger to do shit for a television show (or anything else for that matter) as long as I lived. There were million other hobbies one could engage in, and this seemed like the perfect time to finish that 5000-piece jigsaw puzzle. It was during this period of fannish-detachment your letters started arriving; letters full of empathy, encouragement and hope, that served to make the void that was lief by 'Vice Line's' demise, seem that much larger. I cannot describe the feeling you get from being told that some little thing that you did affected so many people in such a way, they feel your sense of loss as if it were their own. It all boiled down to evaluating my reasons for starting a zine in the first place. It was fun. I enjoyed the creative process of putting together a fanzine; the challenge of experimenting without risking everything I owned to do it. But most of all it was the freedom to let my imagination run wild, and let a little of the fantasy material into reality. The subject matter was simply the starting point, not the foundation. [1]

A situation has come to ray attention that I thought you might be interested in, if you haven't heard about it already. It concerns VICE LINE, a new letterzine for Miami Vice, which was advertised in the last issue of BF by Marie Antoine. The first issue of this new publication appeared last month; Marie also had them for sale at IDICon II in Houston. The producers of the show have recently and unexpectedly served Marie with a Cease and Desist Order to halt publication, and have further ordered that all remaining copies of that one and only issue of VICE LINE be destroyed. Marie has not contacted me personally concerning this situation, so I can only relay what has been told to me by several very concerned fans around the country. Apparently, the powers-that-be behind Miami Vice are aiming the show at a very specific segment of the population, and are not interested in the support of female-type fans who would write in to a letterzine. They appear to not like the idea of the letterzine, and have taken legal steps to prevent Marie from producing any more issues. It's a puzzling situation to me. Why would they go to all the trouble to take legal action and, therefore, make such a big deal out of it? Couldn't they have simply asked Marie not to do it anymore, if they suddenly decided they didn't like it? They've certainly had plenty of time to know about her support of the show, what with her nationwide petition drive to save MV from cancellation. To my knowledge, all of Marie's activities in support of MV have been open and public--why didn't they quietly ask her not to do a l/z before it ever got started? But, frankly, why would they care, anyway? All you have here are a relatively few fans discussing the show in letters. No copyrights are being tread upon, that I'm aware of. At this point, all that's going to happen is that the fans are going to get mad. Why would the producers deliberately antagonize a group of fans? It seems to me than any TV show can use all the fans it can get. If I were a Miami Vice fan, I would be furious... The action taken against Marie Antoine by the producers of Miami Vice is a slap in the face of the fans of that show. To my mind, the producers are saying, 'We don't want you or need you, and we sure don't want you publishing anything about our precious show, so get lost!' It's a sad situation, I think. [2]

LoC's (Letters of Comment) are the lifeblood of any letterzine and I urge everyone to contribute. No restrictions will be placed on length, however, for the extremely long-winded among you, I do ask that you exercise a measure of self control, or ye' editor's red pen may be forced to strike you.

Artwork is welcome and needed. Please do not send anything larger than 8-1/2 x 11, and all work should be on white paper with a minimum 1/2" margin all around. Keep your original. A good, dark xerox is fine.

Short stories (250-300 words) are encouraged. Because of the type of program we are dealing with, no ratings will be imposed. However, if you think it might not pass the NBC censor, chances are it probably won't pass me either. If published lyrics are a part of your story, please include the title, artist and songwriter.

Ads are free to subscribers. Non-subscribers will be charged 25 cents per ad, per issue. As there are several adzines on the market, the classified section will never be longer than two pages, and material and/or products relating to "Miami" will be given preference.

Due to the rock-bottom pricing of this zine, no subscriptions will be extended or free copies supplied in exchange for artwork or fiction. I have no desire to publish a "no frills" zine, which makes me dependent upon the charity of others. However, I am committed to keeping VICE LINE affordable, and can promise there will be no price hikes during the first year of publication.