Valley of the Shadow

For other meanings see Valley of Shadow (disambiguation). 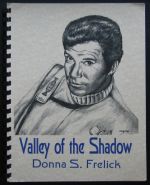 Valley of the Shadow is a gen Star Trek: TOS novella by Donna S. Frelick. Artwork by Christina Kyle, David Lawrence, Jeanne L. Matthews, Christine Myers, Julie C. Nosal and Zaquia Tarhuntassa. It was first published as standalone zine novella in 1997, then reprinted as part of the Orion Archives as Orion Archives: 2284 Valley of the Shadows in 2001 and re-released in 2008.

Summary from Orion Press: "The Enterprise is ready for its first assignment following the events of Star Trek V: The Final Frontier: a diplomatic mission to a war-torn planet with a most attractive Federation ambassador aboard to mediate the dispute. Unfortunately, a plague seems to be sweeping through the area, and one side is blaming the other for using biological weapons while the other side insists there is no plague at all!"

The new Enterprise is sent on a diplomatic escort for her shakedown cruise, with ambassador Elena Christopher to head the talks between two colonies on the brink of war, one believing that the other has sent them a biologically engineered plague. Elena of course is Kirk's new true love. Kirk drills the inexperienced new crew until McCoy balks. They investigate, which involves stealing skimmers and exploring where they're not supposed to go, and Elena contracting the plague. Pretty standard fare. [1]