From a submission request in Zine Scene: "Deadline 3-1-92 for MediaWest 92 publication. Submissions of poetry, stories, filks and art are now being accepted for this new zine! Nazi bashing welcomed and encouraged! Say hello (or bonjour) again to your favorite bunch of POW's!"

From a flyer for issue #2: "Please include a SASE with all inquiries. (The Nazis don't supply stamps)."

Unsung Heroes 1 was published in May 1992 and contains 52 pages. It contains stories by Khylara, Melissa Mastoris, North Star, Michael J. Macomber, the words to the theme song, a photo collage cover by MAM, and more. 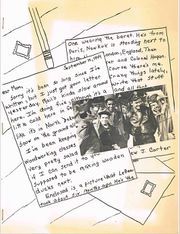 From the editorial of issue #1:

A lot of people have asked why Hogan's Heroes? If you watch the show, you know that there's a lot of holes that they never filled in (what happened to Kinch, did they ever get liberated, that sort of thing.) "Unsung Heroes" is an attempt to fill in a few of those holes.....Some of you may notice that a story promised on the flyer has not been included in the zine. Unfortunately, last minute revisions of "Salvation" ended in disaster when the author's computer crashed and the story was lost. As there was no time for a rewrite, we decided not to include it in the zine. I apologize, and hopefully it will appear in either a later issue or another publication... 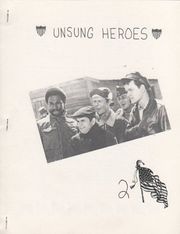 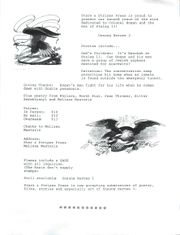 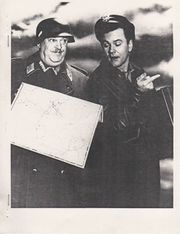