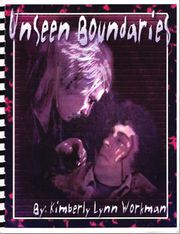 Unseen Boundaries is a slash 109-page Starsky and Hutch novel by KimberlyFDR. The color cover by Virginia Sky. Art samples are included on Fanlore with the publisher's permission.

It is based on the unfilmed SH script, "Up a Blind Alley" by Rita Ractliffe in which Starsky faces blindness.

Publisher's summary: "Starsky is attacked during a case, but the trip to hospital reveals a tumor is discovered, pressing on his optic nerve. While the search is on for a surgeon who can treat him, Starsky must adjust to being blind, and Hutch tries to solve the mystery behind the attack. As they solve one mystery, they discover a few secrets they've been keeping from each other."

This zine is a culmination of many things since I actively came into the Starsky and Hutch fandom. It is my first zine-length story and the first writing I have done in S/H. The story is based on the unfilmed script "Up A Blind Alley," which was supposed to be an episode during the 4th(?) season of the show. I set out to merely fill in the gaps of what happened between the scripted scenes in a continuance of what the script was written to convey. The boys, however, had other ideas. One simple comment about food made them blush and me wonder what they were hiding. With the help of a constant stream of oldies on the radio, a few poems that I felt were written with the boys in mind, and the help of two characters who decided to reveal to me a few of their secrets, I was able to present a story that only they could tell. As with all my writing, the story is not linked to a specific year, thus making it able to fit in where the reader wishes in the Starsky and Hutch timeline. With my need to explore this script, the boys need to explore their feelings, and everyone's need to explore the eroticism of food along with Hutch's brass bed, this zine is made with admiration and an understanding that man have no greater love than that of his partner.