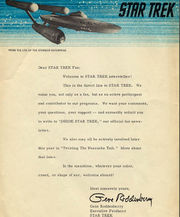 Twisting the Peacock's Tail is a phrase used by Gene Roddenberry in a 1969 letter sent to official fan club members while the show was still on the air. He may be referring to the Save Star Trek fan campaign to bring back the show, which he initiated with Bjo and John Trimble and directed behind the scenes. Or it may refer to something else entirely.

Text of the letter:

Welcome to STAR TREK Interstellar! This is the direct line to STAR TREK. We value you, not only as a fan, but as an active participant and contributor to our programs. We want your comments, your questions, your support -- and earnestly solicit you to write to INSIDE STAR TREK, our official fan newsletter.

We also may all be actively involved later this year in 'Twisting the Peacock's Tail.' More about that later.

In the meantime, whatever your color, creed, or shape of ear, welcome aboard!