You may be looking for Trenchcoat Chronicles, a multimedia detective zine.

Trenchcoat is sometimes referred to as Trenchcoat/Ninth Aspect. It is a gen Doctor Who anthology that is a sort of virtual season. There are six issues. 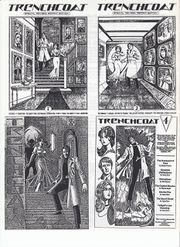 From the publisher, Trenchcoat is a fanzine that chronicles the adventures of a fictitious eighth Doctor. Begun in 1991 by James Bow, this fan fiction magazine series has since yielded four issues. A fifth, dedicated to a ninth Doctor, was printed under the Ninth Aspect banner in 1996. Each issue of Trenchcoat/Ninth Aspect represented a pretend season of Doctor Who. Each story mimicked the style of the television show, including cliffhangers, adventure plots, and returning monsters and villains. Adding to the illusion of authenticity were production notes, plentiful illustrations and listings from the British television guide, "Radio Thymes". In 2000, work began on the Trenchcoat Farewell Project, a publication commemorating the fanzine series, remastering all of the stories and adding new tales at the beginning and the end. Fifty-eight copies of this 864-page, hardbound volume were produced and distributed to fans."

From an eBay seller in 2011: "Trenchcoat is a Doctor Who fanzine that chronicles the adventures of a fictitious eighth Doctor. Begun in 1991 by James Bow, this fan fiction magazine series has since yielded five regular issues and some special projects. Each issue of Trenchcoat/Ninth Aspect represented a pretend season of Doctor Who. Each story mimicked the style of the television show, including cliffhangers, adventure plots, and returning monsters and villains. Adding to the illusion of authenticity were production notes, plentiful illustrations and listings from the British television guide, "Radio Thymes". Everything was collected in 2000 and reprinted as the remastered Trenchcoat Farewell Project. (58 copies of this were produced.)"

Trenchcoat 1 contains 207 pages. From the publisher: "The Great Fear was, in many ways, the pilot episode to the Trenchcoat series, and it features all of the problems that generally plague pilots. But the characters clicked for me, especially Fayette, and I decided to write more. I was well into my fourth story before I decided to collect these stories into a fanzine, and then bind them together using the fictitious future seasons gimmick. The writing of these stories continued through 1990, with the last, The Abbey by the Sea (the longest story yet) completed early in 1991. 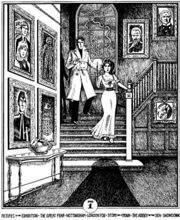 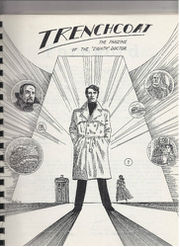 another version of issue #1's cover

It was in January 1991 that I met up with Martin Proctor at a local convention. I was (and remain) in awe of his work. He had been the art director for the Doctor Who Information Network throughout the 1980s, and his artwork graced many of the covers of Enlightenment. He was a celebrity and I was a stranger, but somehow I plucked up the courage to ask him to illustrate my stories, and he agreed. One of the best decisions I’ve ever made.

I began advertising Trenchcoat in DWIN’s Enlightenment. I released the first issue in late May 1991 and took copies to a DWIN Executive meeting, where they sold pretty well. Orders started to trickle in, as well as letters of comment. My first order came from Chris Kocher of Dallas, Pennsylvania. This started a long pen-pal correspondence and he eventually took over the reigns of the series when we moved to Ninth Aspect. A review by Elizabeth K. Shaw in Enlightenment sparked some more interest, and I received my first story submissions for issue 2." [1] 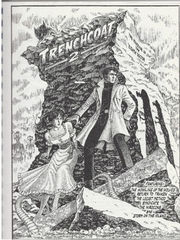 From the publisher: "Trenchcoat 2 began writing in the summer of 1991, with the first stories being sent to Martin Proctor for illustration by the end of the year. I had learned from my mistakes in the first issue and I felt that the issue was improving. This issue was released in May 1992, was sold at the Who Party 10 convention in Toronto and started to receive more attention from within DWIN and other fan clubs." [2]

Trenchcoat 3 From the publisher: "I think it was Trenchcoat 3, released March 1993, that made the series. It was in this issue that my characterization of Fayette Calonne hit her stride. Jabberwocky Dreams, a story that focuses primarily on Fayette, with the Doctor only appearing in the final minutes, was voted the best story of the Trenchcoat series and has received a number of other good reviews. It was also with this issue that the Trenchcoat series started to be noticed outside DWIN. It was the first issue of the series to feature more stories by other authors than by myself. The issue competed with Roving Reporter for the Fan-Quality award at MediaWest in Lansing, Michigan, and was reviewed in a number of fanzines, including The Whostorian Quarterly." [3]

My favorite story in Trenchcoat 3 is Jabberwocky Dreams. I found this story hard to put down and extremely visual. Of all the stories in Trenchccoat 3, this is the one I could see being made into a successful TV production, either animated or live action. The other stories were also well written. Martian Colonies is a classic Dr Who adventure. The implications of this visit to Mars are only revealed at the end of the story and make you wonder if the Dr hadn't planned on calling here. Company of the Rani is another excellent story. It is unusual in that a young soldier is as much a central character as the Dr and Fayette. The reader is as much in the dark as the soldier, and at the end of the story there are as many questions left unanswered as were answered. Perhaps a sequel is in the works? Death Expedition and the Empty Man are also good stories. While both are set in the future, the world is not too strange a place. These two stories are traditional Dr Who style adventures. The two weakest stories in the volume, in my opinion, are Millennium's End and Mammoth. They are well written and well paced; the problem lies, I feel, in the supporting characters. I didn't feel I knew who these people were so I couldn't get too concerned about what happen to them It is difficult in a fast-paced adventure story but that would have helped set the scene and grab the reader's interest[1] 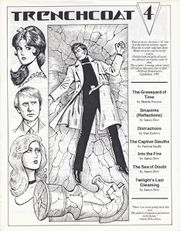 From the publisher: "Trenchcoat 4, released July 1994, built on Trenchcoat 3’s success, featuring longer stories, desktop publishing layout and a colour cover. This issue won the Fan-Quality award for Best Fanzine and attracted a lot of attention. By this time, though, I felt that the eighth Doctor era should be drawing to a close. My Doctor had been around for a respectible length of time, and Fayette was now the second longest serving companion in the history of the series. This coincided with my heading into my final year at university. Anticipating that I would not be able to handle as much of a workload, I decided to regenerate the eighth Doctor and hand over the reigns to another." [4]

Summaries below are from the fanzine publisher's 1994 flyer posted to alt.drwho.creative:

Trenchcoat 5: Ninth Aspect From the publisher: "Chris Kocher, the first person to order a copy of Trenchcoat 1 through the mail, was the person who agreed to take over the reins. I helped him establish the new ninth Doctor for Trenchcoat 5: Ninth Aspect by novelizing Martin Proctor’s Sentinel as the ninth Doctor’s first story. I then tied up remaining loose ends with The Shattered Clocks and handed over the fanzine to Chris. Even Chris had to deal with life’s priorities, however, and the issue ended up delayed, finally seeing release in May 1996. This issue too was well received, with a number of complimentary reviews in a number of fanzines." [5] Due to RL obligations, progress on Ninth Aspect 2 faded.

The Trenchcoat style is described as quiet and subtle, but this is only half the truth. The style is usually very chaste, and some of the mental pictures it produces are virtuously boring. But although the fiction is very underplayed compared to the flamboyant New Adventures, it's not as if James and his co-authors have no sense of humor. The prose is furnished with bad puns and the excellent art work of Martin Proctor, Pat Degan and others. The most massive success is 'The Memory of trees' by Erin Noteboom. It's an Ace departure story, the alternative to Kate Orman's setpiece. It's the centerpiece of this publication, taking up much more space than any other contribution. Whereas some of the reprints from the earlier Trenchcoats go moldy with superfluous continuity, Erin's story is completely original work of historical fiction. Plotted around the Battle of the Bulge, it's completely different from anything ever published in Trenchcoat. It has more in common with The English Patient than Genesis of the Daleks. Which is a great relief, as Nazi stories in Doctor Who fan fiction usually consist of Peter Miles in buffed leather, goose-stepping around and shouting in a predictable way. Actually, that's true of the television series as well .... Casting your choice of actors for roles in a work of fan fiction is commonly called dreamcasting. The ultimate in dreamcasting is an epic in which all the roles are played by either Sean Connery or Patrick Stewart. Trenchcoat doesn't go that far, but there is dream-casting here. The introductions to every story include a fictional page from the Radio Times giving cast information and assorted in - jokes. Imagine Winona Ryder as an 18me-siecle French girl, Fayette, who travels as the Doctor's daughter in some stories and whose attempt at cursing is a muttered 'Sapristi". It doesn't ring true somehow. Fortunately the range of styles in the Trenchcoat Farewell Project is broad enough to include something for everyone.[2]