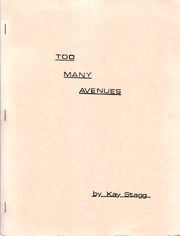 Too Many Avenues is a gen Star Trek: TOS 171-page novel by Kay Stagg. Interior artwork by Fiona Graves.

From a publisher's ad:

Kirk nearly dies from a mysterious illness but once he recovers, it seems the reasons are far more involved and both he and Spock have to return to a starbase and go under cover on the orders of Admiral Komack. Events then become even more life-threatening.

At 171 pages, I found this a good, long, uncomplicated read, and I use the word 'uncomplicated' in a complimentary rather than a derogatory manner. I like adventure stories set firmly within the framework of the 5 year mission. This draws on bits and pieces from several episodes, so one feels thoroughly at home, and it reads rather like an extended television episode (except for the parts the BBC would censor.)

The first few chapters set the scene, the Enterprise visiting several different planets. When Kirk develops a mysterious illness, Spock and McCoy look back over the visits to trace the possible cause. When they discover that the illness is in fact deliberate poisoning, they form their own suspicions as to the culprit. Once Kirk has recovered, he and Spock go undercover in an attempt to flush out the suspect. He evades them right until the end, when the story reaches a satisfactory climax. To say any more would spoil the plot.

I liked the relationship between the main characters. If not as intense as in some zines, it's probably much nearer that of the original series. My own personal dislike was the inevitable romantic interlude for Kirk. I never liked the obligatory females in the series, and I don't often like them in stories. In fairness, however, this is a personal dislike, and here the romantic scenes are just an interlude, and don't detract from the main story.

Finally, as a fairly new zine reader, I must say how impressed I am by the fact that someone is willing and able to produce 171 pages of well -thought-out story, for no apparent reward other than the pleasure of sharing their vision of ST with others. I consider this story well worth the money, as it's better than most of the stories put out by professional authors, who presumably get well paid for their efforts. [1]

My overwhelming favourite. A fast-moving story, exceptionally well written, better than three quarters of the professional novels. The ending is lovely. [2]

Kirk and Spock transport down to planet Z309; Spock is to install computers on the planet. They have to carry passes as the planet is split into two; one a law-abiding zone, the other a lawless zone. McCoy beams down with them but stays at the hotel. When Spock has nearly finished installing the computers they decide to leave finishing off till the following day. As they leave, they find they hove left their passes at the hotel, so they must hurry or they will be caught without the passes. Kirk is gazing up at the stars when he slips and fractures his arm and wrist. Suddenly they are surrounded by militia; they try to explain but are taken to the local prison. There they are stripped and put into a cell. Spock helps Kirk as his arm is very painful. The next day they are in the dining room when some of the prisoners start propositioning Kirk; they are rescued by one of the guards who takes them to the governor. In the mean time, McCoy realises they haven't returned and is told they will not be released until morning. Kirk and Spock are released and McCoy sees to Kirk's arm; the computer work is finished by Spock, and they depart. Later they are told to transport cargo and a man called Barnes, who is one of high-ups in Starfleet, to a planet. Kirk asks what the cargo is but is told by Barnes he doesn't need to know. After Barnes and the cargo are delivered, Kirk starts to feel tired and odd things happen to him. Eventually he collapses and they find that he has been poisoned by a poison from a purple bush that grows on Z309. After a search they find that Kirk's drinking water has been slowly poisoning him by means of a small box attached to his water supply. Kirk is finally given the antidote and slowly recovers. They realise that there must be a traitor in Starfleet higher echelons; Kirk contacts Komack and they decide they must go back to Z309, as they think this is where the trouble lies. Kirk and Spock are given injections to help their hair grow long And their skin to become sallower. They have to fly a shuttle called a G115, which Kirk does not trust. Anyway, finally they are on their way, with the Enterprise told to leave so that no-one knows that Kirk and Spock are not on board. Just before they get to Z309 they hit an ion storm, which tosses the shuttle around causing Kirk to bang his face on the cargo boxes causing him to have a scar running from cheek to jawbone, plus numerous bruises, Spock has to seal the wound before they can land. They eventually land and have to leave the ship in a local warehouse as they don't have enough credits to secure its release to leave; they have to find work on the planet.... How they find work and what happens afterwards you will have to buy the zine to find out- This is another mainly Kirk zine but I couldn't put it down. After they find work the action heats up... This zine is well worth the money! [3]