To Defy the Night

To Defy the Night is a K/S story by C. Liane de Maier. 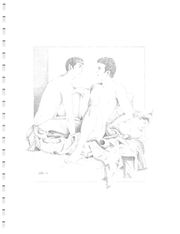 clm ("Look at Me") -- "This is a very charming pencil piece done by the author of To Defy The Night, the accompanying story. This woman is definitely a talented person—I loved her story and I find this drawing fanciful and lovely. I especially like the way it’s framed with a thin pencil line and the blanket and pillow extend outside the borders. And a very nicely done older Kirk (because of the hair style)—I love the way he’s looking at Spock— almost timidly, yet provocatively as Spock leans forward…." [1]

It was published in the print zine Beyond Dreams #1.

This story was nominated for a 1999 STIFfie Award.

"Kirk finally confronts Spock over Spockʼs rejection of him as a friend and lover after the fal tor pan."

A very beautiful, intimate story that begins with an older Kirk walking on a beach, contemplating his life situation and his relationship with Spock.

The whole scene is surprisingly involving—I say surprisingly because many times long passages of nothing but inner dialogue and thoughts can be very static and difficult to read. But this is so up-close and personal, and inter-spliced with actions and reminders of where Kirk is at the time that it moves along and the reader is drawn in. There’s excellent characterization and gorgeous language. And when they see each other at a reception at the Vulcan embassy (described so beautifully as an old-world mansion), it’s magic when their eyes meet across the ballroom. A walk along a deserted beach at night under a full moon is the romantic perfect setting for them to talk. All this is so rich with emotion as Kirk confronts Spock with abandoning him and Spock says he can never bond. Then a stunning moment when Spock tries. The next morning together they express their long- held love for each other and they meld. I really liked the last scene where Kirk finds a piece of driftwood on the beach that he had seen only the day before when his world was sad.

This is really a wonderful story beautifully written by an author whose first language isn’t English, but you’d never know it. [2]

I loved this story with Adm. Kirk in despair. Everything is explained so deeply and at length, in a way I really like. Lots of paragraphs, though, were really long and dense. (I seem to be hyper-aware of this lately.)

The opening has Kirk walking on the beach in San Francisco, deep in thought. He's 61 years old now, being offered a base position again. It's after ST6, and he's a captain without a ship again. And Spock...they haven't been close for a while, though they had been lovers before Spock's death. By the end of this scene we see Kirk feeling energized, with new resolve. After all they've been though, he will not let Spock get away from him. Really beautiful moments at a reception at the Vulcan Embassy, when he and Spock come face to face. And then an intense scene walking on the beach, hashing it all out. I like how Kirk gets all stirred up out of hurt and frustration, feeling Spock's been shutting him out. I love these older men having and expressing such strong feelings, relating on this emotional level. Spock has been cool toward Kirk for a while now, trying to dissuade him. But Spock does love him still. This is a unique premise: Spock says that since Genesis, the refusion and his reeducation, his shields are so strong that he can't lower them for Kirk, for anyone. He's been to healers even. So they can't meld, can't bond; and Kirk is devastated. A great interchange, Kirk being so Kirk—insistent that he can do something that no one else can, that he can have what he wants. On the sands, they try to meld.... A powerful scene.

We come in on them the next morning, and Kirk doesn't remember at first what happened. I'll just let you read it; but the rest of the story is wonderfully drawn out, hot and poetic sex, and gorgeous, cathartic emotion. And a beautiful closing. [3]

'To Defy the Night" by C. Liane de Maler was wonderful. It answered many questions raised by the movie, The Undiscovered Country. She builds up to the pivotal scene in which Spock's hidden truth is revealed beautifully. And she captures defensiveness/stubbornness and Kirk's determination/stubbornness perfectly. [4]

I've read this story several times now trying to get a more objective take on it than my original impression. Every time I read it, though, it makes me cry. It's not too unusual for a story to make me cry on the first reading; it's very unusual for one to still be making me cry on the 5th or 6th reading.

The story is set many years after the fal-tor-pan. Kirk and Spock were lovers before Spock's death, but their relationship did not resume after Genesis. At the beginning of the story, Kirk is pondering his future, with Starfleet and personally, and he determines that he will get Spock back or know the reason why. The author's explanation of why Spock was unable to resume their relationship was very believable and very sad. The emotional pain that Kirk experiences is very well expressed and heartbreaking. His longing for Spock and for the closeness they had shared is deeply touching. Spock's pain shows through his reserve, but the depth of his reserve helps to explain some of Kirk's pain. I would have liked to read some details of what occurred during the meld that brings the resolution in the story. However, detailing that scene would have derailed some lovely parts of the story later as Kirk is struggling to understand what has happened. His dawning realization of what happened in that meld is one of the several points in the story that always makes me cry.

This is a deeply touching and beautiful story that will well reward a reading. [5]

Although this story had quite a dark feel to it, that did not spoil my enjoyment of it. It takes place some time after Spock’s fal tor pan and Kirk is hurt by his apparent coldness ever since then, and cannot understand the reason why he is behaving as he is. After Kirk decides to finally confront Spock about his behaviour, he insists on pursuing Spock and asking for an explanation of his seeming lack of interest in rekindling their relationship since his rebirth on Vulcan. Their conversation, in the romantic moonlit beach setting is very emotional, especially when Spock finally reveals the real reasons for his behaviour. Of course, Kirk persuades him to try to meld anyway, and of course this leads to a wonderfully written and emotional ending. I have to admit, this was an unusual and well written tale, and although it starts off quick dark in theme, we end up with a wonderful ending, in true k/s style. [6]