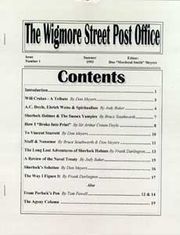 The Wigmore Street Post Office is a Sherlockian newsletter with twelve issues. It was the publication of an online bulletin board and club of the same name.

"One of the concerns about electronic Sherlockiana is its ability to disappear without a trace — yet if something makes a big enough impact, traces will always remain. I'm not sure what the first Sherlock Holmes society of the internet was, but if you're thinking it was the Hounds of the Internet (begun in 1992), you're probably barking up the wrong tree. Almost a year before the Hounds was the Wigmore Street Post Office, founded in the "Arts Club" bulletin board section of the Prodigy Computer Service. Of course, as members were obliged to be signed on to Prodigy to visit the board, the future of the WSPO was equally limited, as more and more members gravitated to other services like AOL. Yet during its day, the Wigmore Street Post Office could boast of scholarly fun and a humorous bent that matches anything that's come along since. The journal of the WSPO, which had the same name as the bulletin board and club, reflected that, often reprinting exchanges from the bulletin board itself." [1]