From Fanlore
Jump to: navigation, search
The Secret Sharer is a Star Wars 50-page novel written by Joyce Yasner. 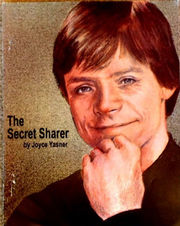 front cover: "'Let's Hear It for the Boy!' by Karen River, with permission of the artist. It was reproduced by four-color process by Color Q Inc., Dayton, Ohio."

Reprints of this zine do not include what must have been an expensive cover to print.

The following people helped in the creation of The Secret Sharer: Carol Hines-Stroede, who read and listened and held my hand a lot, especially over the last few months; Paula Smith, who read and listened over the years; Devra Michele Langsam, ditto; Cindy Walker, ditto, with extra gratitude for providing reality-fixes; and Anne Elizabeth Zeek, who's been there, if offstage; Mordecai Zibkoff and Michael Hagen, the computer nerds; Emilio/Butter for the tiff file; the Bills, for keeping the Fairchild flame alive; Fairchild Publications, for the use of its computers, printers, and paper, and giving me a place to write.

Production details: The Secret Sharer was written by hand and in a proprietary version of XYWrite by Best Info on an AT&T 6286 WGS and translated into QuarkXpress 3.32 for set ting on a Macintosh Ilci. The body copy is set 12/12.5 in Century Oldstyle, roman and italics, tracked as necessary; title, byline, subtitles, and headers are set, respectively, in Franklin Gothic BT Extra Condensed, Franklin Gothic Condensed Regular and Century Oldstyle bold, kerned as necessary. The original was printed out on a Hewlett Packard LaserJet 4V and xeroxed by Park Heights Stationers of Brooklyn, New York.

I am a Darth Vader fan. Given the story Star Wars tells, this means I am also, inevitably, a Luke Skywalker fan, since it was Luke's love that redeemed Darth. However, although I understand why, dramatically, Darth had to die at the end of "Return of the Jedi," I have always been saddened by his death and wondered whether, had things gone slightly differently, had someone felt, thought, or said something differently, Darth might have lived. The Secret Sharer, then, is my embodiment of this wish.

There is one new onstage character, Jarikinar, Luke's Ryukyuan Force master, and Luke's mother, Jood, is mentioned, as is her Ryukyuan Force master, Bas Erin. The action is mostly internal: The characters all spend a lot of time thinking and talking to each other. If you are the sort of reader who requires a rip-roaring space battle to get your blood racing, this is not the novel for you. If you're curious about what it's like to study the Force, and what I feel, from my own martial arts experience, that study must entail, you should enjoy this. There is also a lot of history in this novel, a history of the Jedi, the Clone Wars, Luke's mother (Darth's lover), and Darth's run in with the Emperor and subsequent fall to the dark side.

From the standpoint of tone, this novel is extremely realistic. I don't think Star Wars is science fiction; I'm at a loss to know what to call it. It may be myth or fairy tale. The Secret Sharer, though, is psychological real ism. On this score, it is not for the faint of heart. Because I refuse to believe that Darth is evil — this does not mean that I don't believe he did evil things — I had to look into what I saw on-screen of his relationship with Obi-Wan Kenobi and the Emperor and figure out what it was that would make him do evil (or turn him to the dark side of the Force, to use the language of the films). I also, of course, had to ask myself what the dark side is. Some of the events in this story are, therefore, very ugly. There is violence, and some of that is sexual. The characters in this story play for keeps. You might get upset; I hope you'll find getting upset worth your while.

I hope you enjoy this story. I think enjoy is the right word, however awful it may be in places. (Awful used to mean "inspire with awe.") Let me know. Seriously. I'd. like to hear from you