The Rules Of Being A Godson 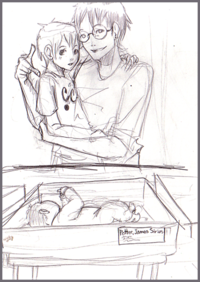 Art by elaboration for Part I of the story: Harry showing Teddy a newborn James.

The Rules Of Being A Godson is a Teddy/James Harry Potter fanfic by Sam Starbuck. The first part of the story was published the day of the release of Deathly Hallows, making it one of the first next-gen fics ever written.[1]

The first of the story's three segments, as posted on Sam's Dreamwidth, contains illustrations by elaboration, whom Sam credits as the inspiration for the story in the author's note:

"This arose while Cara and I were CAPSLOCKING like crazy over the book; she said she wanted to draw Teddy and ship Teddy/James. I said if she drew it I'd write it, and you see before you the result."[2]

The story won first place for "Best Slash Romance" at the 2008 Hourglass Awards.[3]

Author's summary: Teddy Lupin never gets too close or feels too much; his godfather's son never does anything else.

Whether you know him as Sam the Storyteller, SamVimes,or Copperbadge, there is no denying that this author is gold. Previously recced on Coffee and Chocolate for his humour masterpiece, Sublimation and the Snitch, he is perhaps better known for his excellent slash romances, and this piece does not disappoint. Action! Drama! Longing! All in Copperbadge’s wonderfully straightforward style. This is excellent, and the reason I ship Teddy/James about the same as Teddy/Victoire.[4]
-- afterthree at Coffee and Chocolate, 2008

I clicked on this out of mild curiosity even though I'm usually only interested in the Albus/Scorpius side of next-gen. Since it's copperbadge, of course I wasn't disappointed. I love the way the author fleshed out the characters, but especially Teddy. I'd never really thought about Teddy's character before I read this, and even if I had I wouldn't have imagined him like this based on the epilogue, but copperbadge really makes it work. This Teddy has definitely entered my personal canon. Oh, and the first chapter has some truly lovely art by elaboration which is definitely worth looking at even if you don't read the story.[5]-- tani, 2008

This is lovely, warm story. I read it while in London and was delighted to see a good, full-bodied story of the epilogue generation characters’ lives appear so soon. I would say more about the protagonists but I’m not willing to spoil you, so I’ll have to be vague. Could you buy it based on just my saying that it’s excellent writing? Please do![6]
-- painless_j, 2007

This story is beautiful. It's from Teddy's point of view, beginning with James' birth and all the way up to his Quidditch career. The story is straight-forward, simple, and powerful. In the first segment it's supplemented by wonderful sketches, and if anything, you should give them a look. This story is—hands down—one of my favorite minor pairing stories.[7]-- calciseptine, 2007

I almost want to say this is gen, but it's not. It follows Teddy through the years, from the time when James is born. Little Teddy is adorable. Little James is also adorable. There's fanart to accompany the story. It's well written. It's believable. I don't even ship it (I ship Teddy/Victoire, actually, and it makes me sad that I've never found a fanfiction about them that doesn't suck), but I love this anyway. There are a lot of fantastic writers for this pairing (it's one of the most consistenly [sic] good pairings I've seen so far). The link goes to the first part of three. There's the age disparity, and if that bothers you, don't read it, but they're both adults.[8]
-- mocasines, 2011