The Problems of Doctor Penhaligon 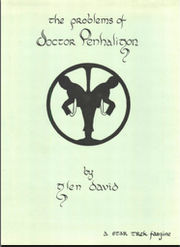 The Problems of Doctor Penhaligon is a gen Star Trek: TOS 55-page novel by Glen David. It has the subtitle: "Stop the Starship -- I Want to Get Off."

From an ad in Universal Translator #17: "The latest zine by Glen David chronicles the adventures of a Cornishman on the Enterprise."

With 'The Problems of Dr. Penhaligon'," Glen David continues the, sideways look at the Enterprise that is becoming the hal mark of this writer's style. Dr. Penhaligon introduces a new character to the ship, always a risky business and even more, so in this case since the Dr. (M.D.not Ph.D.) is the new Assistant Science Officer!

However, Glen David carries this off triumphantly and the reader is left with considerable affection for the unassuming and likable Dr. P. who is a character of some substance. The secret of this believahility lies, I think, in the loving attention to character detail and the satisfying way the details (e.g. the fact that Dr. P. is a Cornishman) relate to the plot. Also, the Dr. is reassuringly ordinary, a Jack of all trades, a nice touch for would-be Mary-Sues. There's hope for us yet!

The setting of the story is comfortingly series (a welcome relief for this reviewer) and Dr. P's problems begin as soon as he arrives on board as the fifth Assistant Science Officer in three years. Soon 'umps' and 'svops' emerge to complicate his life and the plot begins to escalate as the Enterprise arrives at Exo to inspect the dismantling of the equipment developed by Dr. Roger Corby ('What Are Little Girls....?')

This is not a heavyweight agoniser, nor is it a Kirk and Spock centered narrative but in their appearances the lead figures are striking, and always true to character, (The author has created a sometimes unnervingly alien Spock). At the same time, the sense of buzzing life on the ship is deeply satisfying.

Perhaps one of the strongest features is the author's gentle/subtle sense of humour. 'Stop the ship, I want to get off' and 'I'm not sure I want to be assistant to a legend,' cries Dr. Penhaligon. The humour is deft, a beautiful shorthand, totally lacking in laboured Spock ears/Kirk diet jokes. Did you know that the library computer incorporates a de-agglutinator that interferes with the higher frequencies of Spock's hearing range? Likewise, Dr. Zbos has created a rival computer system to duotronics, which he has christened the Zbos Empirical Nominate System, only, Dr. P. suggests, so that he can call it Zen. Look, if I share any more of these gems with you, I shall spoil the zine.

To reveal details of the action, would again mar the reader's enjoyment but it I have a criticism, it is that I sense the author feels called on to explain the ratifications of the plot almost too carefully as a reaction to being slightly uncomfortable with those details but nevertheless is determined to ensure that the readers 'get it'. (.e.g. the briefing room sequences). Also while appreciating the author's motives (Dr. P. is not a man of phasers and action), I found the ending very slightly anti-climactic. Still a good non-sentimental solution is provided for Christine Chapel and the sheer stylishness of the technique far outweighs any deficiencies, creating a refreshingly different kind of story much appreciated by this reviewer.[1]

Dr. Penhaligon, a Cornishman, joins the Enterprise as Assistant Science Officer, and when Spock is injured in an explosion undertaken his assignment to inspect the investigation of the Corby installation on Exo Three. This zine is an object lesson in the art of using a writer's own characters in a Star Trek story. The author treads the narrow line between creating a strong, appealing character and not allowing us to forgot that it in a Star Trek story we are reading. Glen David then goes on to present via with an acceptable, likable Christine Chapel. This is a serious story, but the humour is deftly handled, with a happy turn of phrase that has the reader smiling appreciatively. The regular characters come alive for us, vividly described in aptly chosen words - the sentence which covers Spock's arrival on the bridge is one I found especially memorable. Now for the bad news. This is one from the archives, having been published in 1982 by Empathy. The impression it made was so lasting, however, that it was one I thought of very quickly when looking for an older zine to review. It's worth keeping an eye open at zine auctions, or searching second-hand zines on sales tables ~ this is one of the best British zines by a writer we see all too seldom. As far an I know, this was the only Dr. Penhaligon story printed - if I'm mistaken I'd like to know about any others. Come out, Glen David, wherever you are! [2]