The Patakis was a virtual season-type project started by Nicole K. to continue the idea of The Patakis spin-off of Hey Arnold! which Nickelodeon had shown interest in, however, they deemed it "too dark" and nothing came of it. However, Craig Bartlett had done interviews and given information away on what the show would have contained which this focused on. Although the The Patakis only had four "episodes", it is one of the noteworthy ones that used the idea with both fanart and fanfiction. 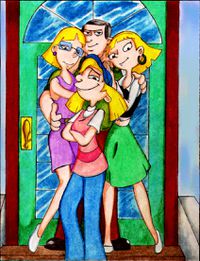 The tension between Olga and her parents about her new career choice becomes too high. So, to prove she can make it on her own, Olga moves out...and into Sunset Arms.

The students are scheduled to take a nature study of Elk Island for their science class. Unfortunately, according to one of Gerald's Urban Legends, a monster lives in the depths of the Island's caves...

When the power goes out, The Pataki family must learn to live with each other without electricity (or dinner).

Helga paints an abstract version of Arnold and leaves the painting unattended, Olga gets ahold of it and places it in a state art contest. Can Helga replace it with a new one before the secret is out?

When Phoebe loses first place in a science fair to Helga, she starts to become paranoid that Helga will beat her at everything.