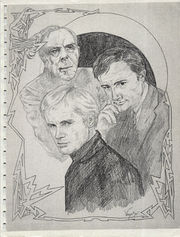 The Old World Affair is a 294-page vampire AU slash novel by Hephaiston that was edited by Peg Kennedy. The cover is by Vanya.

The zine is copyrighted by Fara Driver.

Summary from Media Monitor: "One of the Old Ones, Alexander Waverly- seeks a Human consort for his intended successor: Napoleon Solo. Rescued from a prison camp in Russia is a pale young man who proves worth not only of being a consort but a promising addition to UNCLE."

Author's Acknowledgements from the Zine

For those of you who read my first one (The Perfect Affair) , thanks. Hope you didn't think it was a complete waste of time. Thanks especially to those of you who took the time to let me know what you thought of it - the good and the bad. I learned a lot.

So, this one. It is completely different from the first, in a number of ways.

Secondly, this one is much better written. Whereas The Perfect Affair was a 'passion piece', this one is a story. That's not to say that there's not passion in this one - I loved writing it. But it's not as intense. And because of that, the writing is much cleaner and, I think, much tighter. It's also not as redundant.

And for those of you who were horrified by what I did to Illya in the last one, you'll like this one a lot better. He's definitely his own person here. As a note to all of you who have made it this far, this story is adult in nature - there is sex. There is sex between males and females and males and males.

Oh, and despite every effort on my part - and Peg's, and Mike's and Cecil's - there are typos. I've tried. I've read it so many times that I have whole sections memorized (pretty good, huh!) . I can stare at strings of words for minutes and still miss the misspellings. The worst ones, of course, are the ones that actually are real words - just not the ones I intended. So, please forgive me, and if - when you find some, let me know. Maybe one day, I'll have a clean copy.

There also happens to be a story in here. A pretty good one, if I might say so.

So, here's the plan: the first section you come to after reading this page is an episode list and synopses section. For those of you well-versed in the show, you'll quickly realize several things. The first is that I am only covering the first season in this book. The second is that the episodes are listed differently from what you might expect; I arranged them - and used them for the purposes of this story - in the order that they were filmed, not the order that they were aired. The third thing you might notice is that my synopses are relevant only to what occurs in this book - I do not go into great detail about the episodes themselves, only about the parts that are necessary to imderstand what I have written. To be honest, I did not set out with the intent of using every episode from the show. I had actually written a story - short, as it were - and submitted it to my editor. In that charming way that only she has, Peg said, "Well, we either cut it or expand it. I vote for expanding."

Editors always win, especially when they know what they're doing. So, I sat down and watched the first season in the order of filming just to get some ideas. It was amazing. This show lends itself wonderfully to the premise I created here - or I think so, anyway.

But that's where you come in. If you like what I've done here with the first season, let me know (Bill and Peg have their address somewhere in here, and believe me, they're quite good at getting mail to me - too good if the comments are bad!). If we get enough interested response, then I will go on to do the second season this way. If we don't, then I'll go on to do something else - no, that's not really a threat, I swear! But I do want input, I'm masochistic that way. Tell me what you like and what you don't like and if you like it enough to want to read more. Oh, and if you've never seen the show before and/or are buying this because of the mythology - please let me know what you think! How are the synopses? Too complex? Not complex enough? Incomprehensible? Do they need to be incorporated into the pages of the story itself? These are stylistic things (as opposed to the spelling mistakes!) that I need to know, and I can't know if I don't get feedback.

So, thanks to all of you have read my stuff in the past, and liked it enough not to hold it against me! Thanks also to those of you who have taken the time to comment on my writings and to tell me how to improve - most suggestions I pay attention to, believe it or not.

Thanks - of course and unreservedly - to Peg, without whom I would still be writing circularly and strangely ("What were you thinking here - no, I don't want to know what you were thinking. It's safer that way."). Oh, and without deadlines ("Well, we could try to do it for MediaWest, it's - what? The beginning of February? We've got time. Sure, if you want to try it, we can try it." - Peg, just say 'no'. It's safer that way. And think of how much more sleep you'll get without me calling you at oh-dark-thirty in the morning!) Thanks to Bill and Anne, without whom I wouldn't have a floor covered in zines that I haven't read and tapes I haven't had time to watch - yes, I swear, I'm getting around to it. Maybe if I stop writing... Thanks to the wonderful people with whom I live and work - no one here has shot me yet for playing with the computer 'til all hours of the night or for walking aroumd in a daze due to lack of sleep.

Thanks to Mike - for reading it even though he knows nothing (or, rather, knew nothing) about U.N.C.L.E. until now. Thanks to all the swell people in U.N.C.L.E. fandom who have offered to read it and help me clean it up - next year, I'm not going to be pushing a deadline, I swear! I promise to get those letters typed, not hand-written! And thanks to Vanya. It's more of an honour than I can relate to have a Vanya illustration for the cover. If you don't like the story, the art is still worth the purchase. So, I think that's all. Hope you like it.