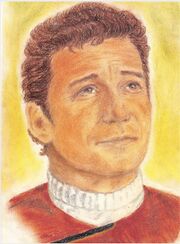 The Mystic Bond is a 106-page slash Star Trek: TOS novel by Susan K. Dundas. Artwork has been uploaded to Fanlore with the publisher's permission.

In a homophobic universe, Kirk must deal with the consequences when he agrees to save Spock's life in pon farr. Kirk had planned to simply resume his life, but he hadn't considered the ramifications of Vulcan mysticism, or the reality of the Vulcan bond. [1]

After Kirk, Spock and McCoy are rescued from the Klingons, Kirk is forced to relive his rape when Spock goes into pon farr. [2]

A Note from the Author

"The Mystic Bond" is set in an AU similar to that of the aired series, but with a few key differences.

This version does not abide by Gene Roddenberry's premise that by the time of Trek all racism (and, in fandom's interpretation anyway, homophobia) will be gone. I feel that is a very commendable idea, but not very realistic. Human attitudes being what they are, and considering the length of time it takes to change them on a large scale, I don't think broad acceptance of homosexuality will be a reality in a mere 300 years.

Other differences: McCoy has a wife named Maggie, and Spock had a wife named T'Chal. In this AU, here never was a T'Pring.

I've spelled "Krugh" (not "Kruge") as when I wrote this novel I'd never seen the name spelled. Additionally, "Kruge" looks as if it would be pronounced "Kruj," where as "Krugh" has a more guttural look and sound -- more Klingon-y.

The Mystic Bond is filled with Vulcan practices, ceremonies, and mysticism as it relates to the bond that forms between Kirk and Spock. First Kirk, Spock, and McCoy are rescued from Klingons, and then when Spock goes into pon farr, Kirk is forced to relive the trauma of being raped by the Klingons when he serves as partner to Spock. It does seem that K/S fans have been really curious about Vulcan culture from the time “Amok Time” was aired back in 1967, and this is one of the K/S novels that tries to give us some background for why Spock is the person he has become. [3]

There's a lot to like in this story. It has solid writing; every sentence is clearly written, the emotions portrayed have no fuzzy edges, the momentum of the story flows smoothly. Every once in a while I came across a word that I didn't know the meaning of, but whose definition was obvious through context, I liked that, a lot, felt challenged and yet not belittled by the author's own knowledge.

The story contains a unique concept of pon farr, one I do not believe I've ever come across before.

(Although the author's foreword identifies the story as taking place in an alternative universe, the differences are minor.) In The Mystic Bond, the pon farr is a religious rite as well as a physical necessity, it's the gateway to control and understanding of self, it'sJhe acknowledgment of all the emotions kept under control at other times. The author did an excellent job devising a religious backdrop for Vulcans that was convincing, and in developing the rituals that Kirk and Spock go through for an entire week. There's a lot of imagination in this zine.

I also admire the way the author didnl back down from certain challenges. For example, she postulates that Spock can only experience true sexual desire during the pon farr, and yet she brings our captain and first officer together in a permanent relationship, acknowledging that problem, and finding a way around it. She also gives Spock a wife, murdered by her Romulan captors while carrying their child when Spock was in his twenties. This is not likely to be a really popular scenario with many readers, but it fits well in the story, provides the impetus for an essential scene.

So, with all the good things listed above, can I say this story is a success? Well, no.

The main problem with this story is that so very little happens in it The story desperately needed a parallel, and eventually interwoven, action plot to support, clarify and expand the events of the pon farr. With the ship under quarantine, and with dead engines causing the ship to float without power near Romulan space, the author certainly set up the expectation of something happening, and I kept waiting for it But by the time I was halfway through the story I realized that the story was not only mainly about the bonding between our guys, it was ONLY about that bonding. I'll admit it, I skipped pages, (though when I realized I would write a review, I forced myself to go back and read it all.) I'll always admire the creative mind that came up with the rituals and the religious philosophy, but page upon page of the stuff was stultifying. What should have been, maybe, thirty pages total, was expanded to fill three times that.

The Mystic Bond is told in three parts. The first was the most interesting, as the big three are captured and tortured by Klingons, and the rest of the crew desperately race to save them, to overcome a new technology. They succeed, but not before devastating physical and psychological harm is inflicted on the captives.

I don't know that there is any other author who can write pain and torture like Susan K. Dundas can. I found it positively uncomfortable reading, which I suppose is a compliment, but I emerged from these passages feeling more than slightly unclean. And I also received the distinct impression that the first section had been written as an afterthought, to substantiate events of the main, middle part. There were a few very minor inconsistencies among the three sections, as if each had been written at different times and for different reasons, so the impression was not a unified whole. For example. Kirk and Spock just about come right out and tell McCoy at the end of part two that they are bonded. Only a total idiot would not have understood what they said in veiled words, and yet most of part three is concerned with the big revelation to the doctor.

I mentioned the clarity of emotions above. There are lots of places where a mystical love between Kirk and Spock is declared, even exchanged within a meld, but I never really felt it in my heart. It was all surface love. Kirk is very, very hesitant to capitulate to Spock's request that he be the first officer's partner in this pon farr. (In one of the story's inconsistencies, Kirk later without explanation agrees to 'the duty" during a three-way conversation with McCoy.) There's an awful lot of talk about the fact that captain and first officer had served together for 28 years in platonic friendship, with no thought of sex or deep love between them. I just didn't SEE that love, other than the fact that Kirk was willing to go through the pon farr with Spock, but then, McCoy also announced his willingness, so I'm not so sure that this is sufficient I think I was "told" a lot about love, and never actually had the chance to "see" it.

And when McCoy argues that Kirk's feeling of "falling in love" is just a by-product of the emotions of the pon farr, I have to agree with him. Logically speaking, it was the height of folly for human and Vulcan to bond when they do.

I feel sure that if the author had elected to expand the story, many of the plot and interest problems would have been solved, and a much more solid, captivating work might have emerged.

The author is an accomplished artist, too. and several really fine pictures illustrate the zine. [4]