The Killing Grounds is an unfinished Blake's 7 novel by Suzan Lovett. 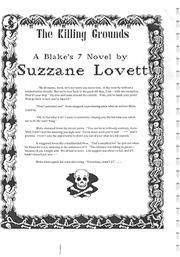 flyer for "The Killing Grounds," with Lovett's name misspelled 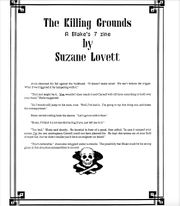 flyer for "The Killing Grounds," this flyer (again with Lovett's name misspelled but in a different way!) was printed in 5th Season #5 in 1988.

The novel was left unfinished due to the turmoil and controversy of The Blake's 7 War.

Another Blake's 7 novel by BNF authors that was close to being finished and then halted for the same reasons is Rumours of Life by Pat Nussman and Jacqueline Taero.

Comments from the Author

Some 2017 from the author in Media Fandom Oral History Project Interview with Suzan Lovett:

Megan Genovese: You left the [Blake's 7] fandom because so obviously you were not too impressed with it. I understand that you were at the time writing a novel length work?

MG: Because you had left the fandom.

SL: Yeah. Yeah. Also once you are in a controversy like that and you know the actors, their voices kind of interfere with the voices of the characters. Their attitudes get in the way of seeing the characters clearly. It was already getting very difficult to write on that novel. The actors were overlaying the characters.

MG: So you had the whole plot planned out. Do you remember what happened? Or was going to happen?

SL: Oh God. Not all that much I still got the notes all over the place somewhere but no not really.

... "By all means, Avon, let's not waste any more time. A day went by without a confrontation already. But we're no back to the good old days, I see... with more exception. Now it's your ship." He rose and came around the console. "Fine, you've made your point. Now go back to bed, you're injured."

"Don't patronize me!" Avon snapped, expressing anew what an irritant Blake could be.

"Oh, is that what that is? I seem to remembering obeying you the last time you asked me to do the same thing."

Blake slammed down the circuit probe. "You can be tediously contrary, Avon. Well, I don't feel like amusing you right now. Go lie down until you're well. -- and I promise I won't take the opportunity to shoot you out of your ship in a life capsule."

It staggered Avon like a backhanded blow. "That's uncalled for!" he spat out when he found his voice, smarting at the unfairness of it. "The Liberator was falling to pieces -- because of you, I might add. We all had to leave. Life support was about to fail, and if I hadn't forced you into --"

Avon slammed his fist against the bulkhead. "It doesn't make sense! We can't fathom the trigger. What if we triggered it by tampering with it?"

"That just might be it. You wouldn't dare touch it, and Carnell will still have something to hold over your head," Blake suggested.

So I would still jump to his tune, true. Well, I've had it. I'm going to rip this thing out, and damn the consequences."

Blake started rolling up his sleeves. "Let's get on with it then."

"Blake, I'd find it a lot less distracting if you just left me to it."

"Too bad," Blake said shortly. "He kneeled in front of a panel, then added, "In case it escaped your notice, I'm the one contingency Carnell could not have planned for. He kept this system out of your field of expertise, but he didn't realize you'd have an engineer on board."

"That's debatable." Avon also wriggled under a console. They possibility that Blake could be his saving grace in this situation annoyed him to no end.

[A possible mention]: Suzan Lovett apparently drafted a time travel crossover that involves someone going back in time to prevent Blake's shooting and inadvertently causing the nice Federation to become the nasty Federation in B7.... maybe I have the story screwed up, i got it from Tashery Shannon verbally over a month ago. Susan never wrote it 'cause she got tied up in time travel paradoxes. And she got pissed off at B7 fandom 'cause of Paul Darrow. [1]

Speaking of 'to be continued' - the zine ends with one of the cruellest adverts ever. Blake and Avon work together... to defeat Carnell... with Blake's engineering skills... in a fic written by the author of 'Road to Hell'... and Avon says that Blake is distracting him... and then they get under a desk together... ...I must read this fic. AND YET. It's almost 25 years later and so I KNOW THIS ZINE WAS NEVER PUBLISHED because there is no record of it anywhere on the internet. Fortunately, I've already hunted down the right gifset to express my feelings on this matter: [See Aralias' journal] BRB, being sad forever..." [2]