The Inheritor is a 104-page gen Star Trek: TNG novel by Cyndi Bayless Overstreet. The cover is by Mickey Sayles. The editor was Marge Robles. 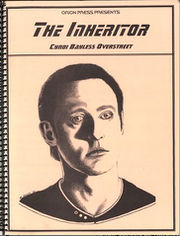 On the edge of the Neutral Zone, the Enterprise encounters a Human free-trader disguised as a Romulan. The man claims to have information that could have serious ramifications to the Federation, but he must return to the Neutral Zone to collect his evidence. Data joins the trader on his undercover journey. Their search for the proof they need is interrupted when they're captured by Romulan miners and become entangled in a web of espionage. The mystery goes beyond unraveling the truth about the miners when Data discovers startling news about his traveling companion. The man grew up on Onicron Theta prior to the colony's destruction by the Crystalline Entity, and knew Doctor Noonien Soong and Lore. What was this man's relationship with the android's creator, and what gaps can he fill in regarding Data's past? [1]

The zine's editorial is by Marge Robles, and it is a rant about differences of opinion, her unspecified experiences on a BBS, and has nothing to do with the zine itself.

I heard the opinion once, that editing was a form of censorship. I could never go along with that. I've always thought that an editor doesn't dictate what the writer says (hopefully) makes sure the writer's works come out clearly. Having recently been exposed to censorship, and having taken a stand on the issue, I'm convinced more than ever that there's a strong difference between the two.

The venue in which I had my experience was that of a relatively new institution, a computer bulletin board. My crime was having an opinion. (The subject has yet to be invented about which I don't have an opinion.) I find it interesting that BBS forum which exists for participants to exchange ideas in a constructive fashion censors those participants. *sigh* I just don't get it. As I retrace my steps, I wonder where I went wrong. The opinion I stated was topical. It wasn't obscene or spiteful. Its only fault was that it was contrary to an arbitrary rule that had been imposed by the sysop.

Someone tried to tell me they can get away with that on BBS because it is a private thing, and I'm paying to be a member. I have a hard time accepting that. Did I miss the sign at the entrance? PLEASE LEAVE YOUR CIVIL RIGHTS OUTSIDE."

I wonder what would happen if I said something out of place here. Attention Orion Press! You don't print enough Picard stories. (Pretty risky statement to make in the pages of a Data novel.)

Would you look at that? We're all still here. *smile*

There's nothing funny about censorship. And there's nothing funny about sitting around with your head in the sand while that kind of behavior goes on around you. There's a price to pay when you stand up and get counted, but it's nothing compared to the cost of just standing silently by. Take a look around you. If you're allowing others to dictate what you can say, there will come a time when there are fewer and fewer things to say. When that time comes, your silence will be overwhelming.