The Horizon B7 Technical Manual is a non-fiction canon resource for Blake's 7. It has three parts. 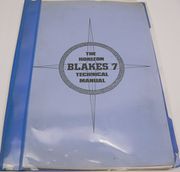 front cover of part 1
From a distributor, Knightwriter:

The technical manual to which I referred is Horizon's Blake's 7 Technical Manual. It has been published in 3 parts so far, with, I understand, another two to go.

I'm not absolutely certain on the contents of the various parts, having long since amalgamated it all but I think it's as follows:

Promised for the next part are Xenon floorplans, and more on Federation ships, Liberator and Scorpio.

The TM is visually superb, and fascinating: Ever wanted to know where the loos were on Liberator? It's also an excellent reference and support text for anyone of a role-playing bent, wonderful for showing players who aren't necessarily hardcore B7 fans... [1]

The Technical Manuals parts 1 to three arrive in a 2 ring A4 paper size binder. Parts 2 and 3 are supplements intended to be placed into part 1 of the Technical Manual. There is a promise of parts 4 and 5 to appear 'real soon now'.

Second impression: The drawings of the Federation uniforms appear to have been traced from the Star Trek technical manual. The boots and people outlines are very close.

Third impression: Oohh, I want to build some toys!

Good stuff: Lots and lots of nice line drawings of stuff. Look is very much like the old Star Trek technical manual. Nice drawings of props and sets.

So-So stuff: Details of the props such as the Liberator and Scorpio handguns; however, details about holsters and power cords are missing. [2]