The Hope is a gen Real Ghostbusters 292-page digest-sized novel by Sheila Paulson. 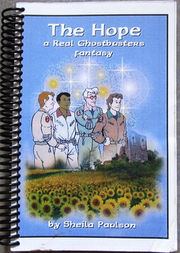 It is set in the same universe as:

From a distributor, Agent With Style: "A fascinating fantasy novel where an unconventional transition between dimensions brings the Ghostbusters to a world that once held elves and wizards, but now is engaged in a 500-year-old war with kobolds, a vicious race subject to fits of uncontrolled rage. An old friend of Ray's is not all he seems. Can the Ghostbusters prevent an all-out war that would destroy the Land? And why is one of the enemy a blood brother of the king's son? Will the team ever be able to return home? This story is set in the same universe as ANACHRONISM and NEXUS... and reunites the Ghostbusters with New York cop Sean Kelly and his partner."