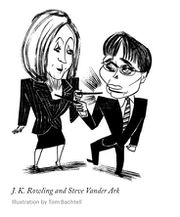 illo by Tom Bachtell from "The New Yorker," for the article The Bench: Fan Feud. Portrays J.K. Rowling and Steve Vander Ark trying to eradicate each other with magic wands. See the article for more context.

The Legal Fracas Regarding the Proposed Print Version

Steve Vander Ark, the principle author of the proposed book and the webmaster of the Lexicon website, was not sued himself, but his involvement in the affair received much attention (and wank) both within and outside Harry Potter fandom.

For months, fans would:

Back in September, Rowling and/or Warner Brothers found out that Steve Van der Ark was planning to publish a book version of the Harry Potter Lexicon. They requested to see a copy of the proposed book. Steve's publishers, RDR Books, didn't respond. JKR/WB sent a Cease and Desist letter. Steve said, "You need to talk to my publishers." RDR said, "We've just had a death in the family, give us time." JKR/WB said, "Sure, no problem." A couple of weeks later, they realized that RDR had used said time off to continue merrily along with their publishing plans, including selling the German rights to the book. By now, it's late October, and the publishing date of the book, November 5th, is growing close. JKR/WB gave RDR until the 29th of October, then filed their complaint on October 31st.

Skipping the intervening legal back-and-forth, the upshot is that at present, RDR Books has been ordered to cease all production on the book until January, when they and JKR/WB will begin the official legal slug-fest. This injunction includes advertising the book and offering it for sale (which as of today they were still doing). They have also, apparently, finally obtained the services of an actual lawyer. He's the cousin of the owner and apparently knows nothing about intellectual property law, but he is a lawyer.

That's the bare bones. The real fun in this business has mostly come from the increasingly bizarre behavior of RDR Books. Their first notable comment was when they told JKR/WB that if they wanted to see a copy of the book, they should get someone in their office to show them how to print the web page. As soon as JKR/WB went to an actual court, RDR began to claim all kinds of things, not least that Warner Brothers had, in fact, infringed on Steve's/The Lexicon's copyright by using his timeline on the Chamber of Secrets DVD, and that they were suing RDR as a preemptive strike against Steve suing them four years later over the timeline. They also likened JKR/WB suing them to the bombing of Hiroshima and Nagasaki, and set themselves up as the underdog in a David vs. Voldemort-esque struggle (no, really, I can't make this stuff up).

For a lot of fans, the truly problematic issue is that the basis of RDR's defense, as near as we can figure, is that because JKR praised the HP Lexicon and admitted to using it once, she thereby waived her copyright and opened the door for Steve and RDR to sell a printed for-profit version. If this argument were somehow to succeed, it doesn't take a lot of imagination to speculate about what will happen next: If a writer can waive her copyright by openly permitting a not-for-profit fan site to exist, then I'd think that any writer with two brain cells to rub together would immediately set about making sure that said web sites were permitted no longer.

Another issue is that some fans are confused/angry/bitter/frothing about why JKR would seemingly allow many other fanworks to be published for profit, and then arbitrarily (it seems to them) draw the line at the Lexicon. According to JKR, she has never had a problem with books that offer commentary or critcism about her work, but she draws the line at books that don't have substantial original content, that instead simply regurgitate her own work. This seems to be borne out by the fact that she has sent Cease and Desist letters to other proposed publications, and in the other cases the publishers either abandoned the project (as Mugglenet apparently did with their encyclopedia) or revised the book according to JKR/WB's wishes. Another problem with the Lexicon, according to JKR, is that she feels it will compete directly with her own proposed encyclopedia (again, this seems to be in line with her actions regarding the Mugglenet encyclopedia).

One thing that should probably be noted about the whole fiasco is that Steve himself has been pretty quiet. He's twice posted "I'm a nice guy, really, don't hate me" letters to the Lexicon, but hasn't otherwise commented about the specifics of the suit, or even, really, given any sort of detailed account of his own involvement. Unlike his publishers, he seems to have decided that the best thing to do is STFU. Which, given his past statements, (mentioned above) is probably a good idea. [2]

Thinks all his FAN work should pay off in $$$.

And here is where our troubles begin.

Steve: But when a woman (and her representatives) say no it actually means yes, everyone knows that. SHE LOVES ME!

Steve's publisher then comes out from under a rock and says stopping the publishing of the Lexicon is like:

Random internet lolyers who have no idea what this is about claim Steve may have something thar and that rich women suck, everyone knows that.

I think the trouble started when he got his own groupies and started suffering from cock-in-the-henhouse syndrome at conventions. It has ruined better men. [3]

Honeybee wrote: Steve's actions have been like an earthquake in the fandom, and things will never be the same after this is all said and done. Steve may very well win in court, but he'll have to deal with the fandom, the very people who he is now depending on for his livelihood.

Ken Jennings replied: Oh no! He's going to wake up with a hippogriff's head in his bed!

I thought you might be making this point before, but I wasn't sure. So now I'll address how goofy it is. From outside "The Fandom," the idea that Vander Ark's HP career is washed-up now is a joke. The Harry Potter books have sold 400 million copies worldwide. By comparison, I bet there are hundreds or even thousands of you outraged fans who would boycott Vander Ark's work going forward! In other words, a drop in the bucket.

In fact, it's pretty easy to argue that the publicity from the trial has actually helped him--made the Lexicon (if it's ever published) more widely known among potential buyers, and moved Vander Ark's name to the top of publishers' lists for projects like this. [4]

Within the fantasy-sci fi genre, of course, author J.K Rowling not only has amassed a great literary-cinematic fortune, she also has shown a pronounced pugnacious legal approach to those who so much as dip a tiny toe into her Harry Potter franchise, even if they are among the adoring. Ask copyright mavens and they still cluck their tongues, for example, over the legal tussle between Rowling and Steve Vander Ark, a school librarian and fan who created any encyclopedic lexicon of the events and characters in the author’s seven Potter books; the author praised the fan site the librarian launched — until he sought to convert it into a print work, which prompted a lawsuit aimed at the would-be publisher and considerable legal consternation as to whether the courts aimed to curb literary reference and guide books. The contretemps was of sufficient note that it earned its own Wikipedia page."[5]