The Great One is a meme in RWBY fandom. Known first as simply the Pyrrha plush, it referes to an odd-looking official Pyrrha Nikos plush doll released in February 2017. People were quick to mock its odd, misshapen design and began making manips of the plush inserted in Pyrrha's canon scenes. The plush was further mocked in an episode of RWBY Chibi where it got the name The Great One, as well as later being massively discounted as part of Rooster Teeth's Cyber Monday sale,[1] which only further cemented the meme. 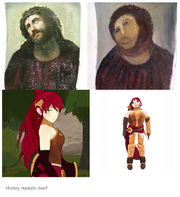 "History repeats itself" - Example of meme