The Grandmother and The Demon 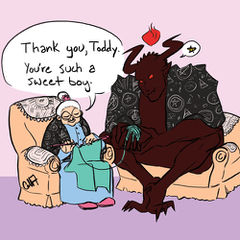 Fanart of "The Grandmother and the Demon", created by bigmammallama5, in response to the initial story. The Tumblr post was simply captioned "i had to"

The Grandmother and The Demon is one of several possible titles for a collaborative story that went viral on Tumblr in the spring of 2017. The story began as a writing prompt published by Prompt Guy on their tumblr blog:[1]

An old and homely grandmother accidentally summons a demon. She mistakes him for her gothic-phase teenage grandson and takes care of him. The demon decides to stay at his new home.

The prompt was initially picked up and responded to by eatbreathewrite, who wrote the first part of the story from the point of view of the demon. The story was widely reblogged and became very popular, with one reader declaring that they would watch an entire TV series of the adventures of Granny and "Todd", whereupon other fans started to develop headcanons and ideas for the "TV show".

The original story was continued by eatbreathewrite, while other versions branched off with readers discussing headcanons and writing additions. As of December 2018, the post had more 460,000 notes on Tumblr.

After the initial prompt, in true Tumblr style, the story branched off into different reblog chain versions of "canon". eatbreathewrite continued to write further instalments of their version, giving the grandmother the name Ethel. These were later collected together in a masterpost entitled "The Adventures of Todd and Granny (Alternatively: “I Saw Granny Ethel with the Devil”)" which featured a reposted version of the initial prompt response.[2]

To date, this version of the story has five parts, published between April 2017 (the repost of the first instalment is dated June 2017) and January 2019.

In other versions of the story, Granny is known as "Anette". This "branch" of the story was mainly written by rocky-horror-shit-show and silvermoonphantom, who suggested ideas for later "episodes" of the TV show, fleshing out the show's "setting" and other characters in the local area:

Okay but she takes him to the little cafe and all of the people in her town are like “What is that thing, what the hell, Anette?” and she’s like “Don’t you remember my grandson Todd?” and the entire town just has to play along because no one will tell little old Nettie that her grandson is an actual demon because this is the happiest she’s been since her husband died.

Bonus: In season 4 she makes him run for mayor and he wins[3]

wickedwitchofthewifi then wrote a lengthy addition dealing with "season six" (the show's final season) and Anette's eventual death through illness, her subsequent passage to the afterlife, and Todd's desperate attempts to keep her from a terrible fate:

With only a few episodes left in the season Anette passes away, Todd is by her side. When the reaper comes for her Todd asks about the fate of her soul. In a dispassionate voice the reaper informs Todd that Anette spent the last few years of her life cavorting with creatures of darkness, that there can be only one fate for her. Todd refuses to accept this and he fights the reaper, eventually injuring the creature and driving it off. Knowing that Anette cannot stay in the Human Realm, and refusing to allow her spirit to be taken by another reaper, so he takes her soul in his arms. He’s done this before, when mortals have sold themselves to him. This time the soul cradled against his chest does not snuggle and fight. This time the soul held tight against him reaches out, pats him on the cheek tells him he was a good boy, and so handsome, just like his grandfather.[4]

An extended ending was added by jumpingjacktrash, which revealed that Anette had known Todd was a demon for some time, but he was still her grandson.

A variation on the theme can be found in a writing prompt posted by Prompt Guy on tumblr in 2021:

Death stands outside an old woman’s house. She warmly welcomes him inside, offers him cookies, and crochets him gothic-themed sweaters. Apparently, the old woman mistakes him for her grandson who is going through a gothic / emo phase. [5]