The Federation was a fan video collective from the 1980s. Their focus was on fan-edited movies. Some of the members of the collective were: Chris Brainerd, Mark Christensen, Jennifer Adams Kelley and Philip Kelley. Bios and a list of additional members are archived here. Info about their video fanzine Video'Zine can be found archived here.

The group has been described as being "formed by a group of friends literally kicked out of a local Doctor Who fan club, The Federation made 18 different tapes--all parodies of Doctor Who or other media--in it's 1980's heyday."[1]

In 1996 the collective posted the following flyer to rec.arts.drwho:

"The Federation were world-renowned in the 1980s as one of the best and most fun-loving DOCTOR WHO fan collectives. Formed in 1983 in Libertyville, Illinois, the Federation were the first group to produce fan-made DOCTOR WHO videos. Shortly after their first videos were completed, they began producing the VIDEO'ZINE, a 2-hour video magazine comprised of Federation films, DOCTOR WHO-related clips and interviews, and other fan-produced videos, most notably Ryan K. Johnson's series of female Doctor films.

The Federation became very well-known for their quality DOCTOR WHO parodies such as DOCTOR WHO AND THE HOLY GRAIL, FLAKE'S 7, THE TIME LORD FROM U.N.C.L.E and S-A-V-E-W-H-O. The Federation made fools of themselves in many costume contests just to win awards.

In 1990 after 9 issues, the VIDEO'ZINE went on hiatus and the Federation more or less disbanded. The "Where are they now?" questions have been coming in ever since. The Federation celebrated their 10th anniversary at Visions '93 and are still present at every Visions convention (Jennifer Adams Kelley is your Visions host and also runs the Masquerade and Variety Show).

The Federation's final video project, the ambitious THE REIGN OF TURNER, has been seldom seen in its current form. Originally conceived in 1987 as a three-25-minute-part parody of the John Nathan-Turner years, its production lasted several years. 20 hours of raw footage was edited into three 45-minute episodes. From the moment the Federation finished the production, they wanted to re-edit a shorter movie-length version.

That was many years ago. Starting in February of 1996 the original producers of THE REIGN OF TURNER finally got their wish to re-edit the film into one movie of about 80 minutes in length. With a new and vastly improved edit, a new stereo music score, and new interest in DOCTOR WHO, the Federation's legendary project will be a must-see. Watch for the premiere at Visions '96, along with other classic Federation videos showing in the fan video room."[2]

In later years members of the collective began making X-Files fan videos, some of which can be seen archived here. A flyer announcing their X-Files video project was posted to rec.arts.drwho in 2000 here: "THE SIX MINUTE REQUIEM RESOLUTION...We venture into straight X-FILES territory with this one, friends. Want to know how we think the seventh season cliffhanger should be resolved? Well, Mulder gets kidnapped... by two fans thinking he's David Duchovny! Will he relent and agree to do 19 episodes instead of 11? Will Scully manage to go five minutes without puking? And what does she mean when she says her baby was born *six seasons ago*????? It will only take you six minutes (plus download time) to find out!" A copy of the video can be downloaded here. 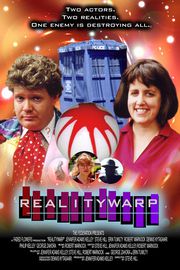 In 1998, a fan posted a review of one of their videos Reality Warp, which was shown at Visionsto alt.drwho.creative:

On the 29th of November at 10:45am in Video Room 2 at HME/Visions '98, I and a number of others viewed the premier of Reality Warp, the long awaited return of the Federation (in association with Faded Flowers Productions) to arena of Doctor Who fan video.

If you are familiar with fan produced videos, you've more than likely become accustomed to the plague of problems that usually surround a production, earning it's moniker "fan-vid".

Unstable camera work, poor editing, variable sound quality, dodgy sets and effects-work are just some of the more common afflictions, come to think of it, a tradition with Doctor Who. But being the loyal and media starved fans of the good Doctor, we do our utmost to look beyond these limitations, and focus our attention on the more important elements, the story and it's characters.

With more affordable equipment, improvements in video technology and general experience gained by fan film makers, some of the more recent releases available have shown remarkable improvements in combating many of the aforementioned symptoms, and I am happy to inform that Reality Warp is one such production.

From the chillingly sublime mood of Robert Warnocks title theme, you immediately feel a higher level of professionalism. As the opening shots follow the journey of the character Nicola Bryant (Jennifer Adams Kelley), the viewer is aware of the transatlantic setting of the story, as she arrives at the offices of the BBC for an audition (much of the action takes place in both the US and UK).

From the outset her audition is not typical. As Nicola waits to be called, she notices a shadowy figure siting across from her, hiding behind a newspaper as its chair hovers inches above the floor. Following a series of strange apparitions where she is addressed as Peri and instructed to obtain the Doctors multicolored coat, a nightmare leads her to contact Colin Baker (Steve Hill). It seems he has also had an unusual and related dream. So begins their quest to resolve the truth of this warped reality.

There are some very enjoyable scenes as the actor's transform into their television characters. High marks go to Steve Hill for his astonishing portrayal of Colin Baker and the 6th Doctor. He successfully combines the mannerisms of Colin's Doctor with solid acting, resulting in a believable portrayal. Jennifer Adams Kelley's character improves during the video, as she becomes Peri. This results in a number of successful scenes where the mismatched duo regains their acerbic chemistry. Erin Tumilty gives a fine performance as the engaging Stacey Aldrich, an employee of the "Beeb" whose curiosity results in her compulsory involvement in the mystery.

A wise decision was made to allow certain actors to avoid the pitfall of assumed accents in the interests of dialogue clarity. However, sound quality was a factor, as variations were noticeable at certain points during the film, resulting in muffled conversation.

Apart from some rushed dialogue and a couple of unresolved plot elements (i.e. the relevance of the cat pin). Reality Warp's story is solid. Some clever video effects and costuming add a layer of detail often lacking in fan videos.

Overall Reality Warp succeeds where many have failed and should make a welcome addition too the serious Doctor Who fan's video library."[3]