The Dreaming Stone Stories is a series of five circuit AU stories (by Jane of Australia) and one story (by Wally) from an anthology zine. They are Kin/Bran stories. 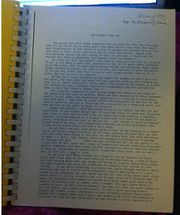 a spiral-bound photocopy of the circuit fiction version

See List of Professionals Fanworks by Jane of Australia.

This is a cycle of five major stories beginning with THE DREAMING STONE and ending with DREAMS OF YET TO BE, which appeared in FANTAZINE 1.

In this universe, the characters of Bodie and Doyle appear in two distinct guises, linked together across two millennia of time through the "charm" of an ancient touchstone that has been in the care of a family of Irish gypsies (tinkers), until an old blind woman called Judith recognized it's owner ... Ray Doyle.

When Judith gives Doyle the dreaming stone, and he holds it in his hands when falling asleep, the "magic" of the stone becomes apparent...

A "dreamtime" opens up, where -- in the space of a night's sleep -- he and Bodie, holding it between them, can live months of their past lives, a former incarnation where they were Kin and Bran...

Kinnamus Iron Hand was w warrior who fell in love with Bran, a young student of harsh drudia teachers. For their love, and for his renouncement of his studies, Bran was outcast, and he and Kin set out to make their lives together.

The touchstone belonged to Bran ... and when he and Kin hold it between them and sleep, they also experience the charmed dreamtime, able to live months of their future lives.

For they will one day be Doyle and Bodie.

Throughout the five stories, emphasis shifts from one partnership to the other, and back. Bodie and Doyle, Kin and Bran, face "death and life" together, and when their time comes -- in a meat locker in Belfast! -- Bodie and Doyle feel that they are returning to source. And then --