The Cure is a two-volume slash novel by Melody C. Published in two parts, it is a Kimble/Gerard/Renfro novel set in “The Fugitive” film universe.

Dr. Richard Kimble gives testimony before Senate sub-hearings for FDA approval of a drug called Provasic, there is only one U.S. Chief Deputy Marshal to head his protection, Sam Gerard. When old enemies in new places once more threaten Richard's life, it's Sam's job to make sure his good friend remains alive. But Sam's feelings for Richard have grown much deeper than friendship and their future together soon takes a very different turn that will change their lives forever. In the aftermath, another Deputy Marshal also finds his own life eternally changed. [1]

The Cure 1 was published in 2005 and contains 80 pages. When the zine was first available from Agent With Style, fans could also receive a CD with Melody's The Fugitive vids. [2] 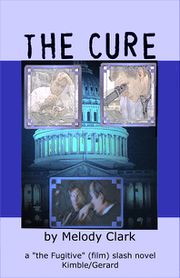 cover part 1
From the author's preface:

I know I’m going to catch a lot of flack over a suggested assertion I make on or around page 69 regarding my interpretation of certain events at the Cook County Jail. However, even the Great and Powerful T.L. Jones has himself mentioned this theory as a possible interpretation of that scene (when discussing “why in hell Sam shoots multiple times at a door he’s gotta know is bullet proof”). Oh, what hoots of derision did I receive (hello, Gayle F) at the very suggestion of this, lo, those many years ago! Well, now I got Tommy Lee on video saying he views that as a valid explanation. ☺ So there. (big raspberry sound). This story CAN fall after U.S. Marshals if you so choose. I prefer to see it as an AU to U.S. Marshals (a movie I didn’t like for a host of reasons), falling within two years after the events in the Fugitive. I’ve excluded Noah Newman from this novel’s characters, simply because there was nothing in the novel for him to do. There were just too many of them for the “cast” and so I eliminated the one least useful to the plot. I also have made mention of a dead member of the team, in case the reader would like to place the events after U.S. Marshals. In that case, that would be Newman. If you like the AU idea, then feel free to see Noah back home, feeding Bobby’s cats or something. And you know Bobby has cats. 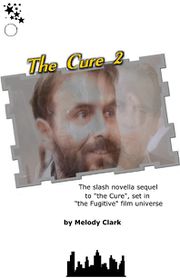 Summary from Agent With Style:

After twenty years on the job, Cosmo Renfro has learned one thing: a U.S. Deputy Marshal always gets his man. But when that man is his boss, best friend and secret obsession, Sam Gerard, things get complicated. In this erotically-charged sequel to Melody Clark's Fugitive novella, "The Cure 1," Cosmo is faced with an agonizing decision: maintain the status quo, or follow the deepest desires of his heart. Shaken to the core by the depth of his feelings and wracked with guilt at the thought of destroying his family, Cosmo resolves to escape. By leaving the Marshal Service and cutting all ties with Sam and Dr. Richard Kimble, Cosmo figures he can bury the pain so deep inside him no one will ever see it. But the two men who love him passionately know what Cosmo has forgotten: you can run, but you can't hide, from U.S. Chief Deputy Marshal Sam Gerard -- or from love.