The Communicator (Star Trek US newsletter 1)

The Communicator is a Star Trek newsletter published in the United States. Fans could purchase it at "Twilight Book and Game Emporium," in Syracuse, NY or by subscription.

The editor wrote in the first issue that: "We've already lasted one month longer than we thought we would!"

The Communicator 0 was published in July 1988.

The Communicator 1 was published in August 1988 and contains 9 pages. 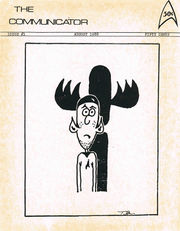 From the editor: "To begin, let us say that the introductory issue of The Communicator was well received and we distributed many more than we thought we would. People have been very enthusiastic and friendly. Thanks to all of you who talked to us and encouraged us. Unfortunately, responses (correspondence and submissions) were minimal. We had originally hoped to get some kind of response from at least 20% of our readers. This estimate, however turned out to be overly optimistic. We would like to thank those of you who did write in (a big, Big, BIG thank you) and to say that we're looking forward to hearing from you again! Also, to those of you who didn't write in - now it's your turn! Ah, Ah, Don't touch that dial... Wondering what we're going to do for next month's issue of The Communicator? We are! (just kidding) How about a highlight on Khan?! Also, the next installment of ship's log. Pass in Review, and hopefully, something written "by you! See you next month! "