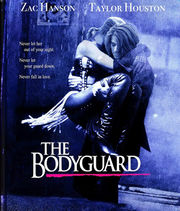 A manip created by the authors
The Bodyguard is a Hanson fanfic by Team Zaylor. It was written from 2012 to 2016 and features the pairing Zac Hanson/Taylor Hanson. The story was written as a continuation of the fans' in joke about Zac often seeming to act as Taylor's bodyguard in public.

The summary reads as follows:

After the death of their parents, Taylor and Zac went their own way in life. Taylor became a superstar and never thought his chosen profession would bring danger into his life. Blade (Zac) buried the past and lived his life contently in the dark and dirty world as a pimp. Unexpected circumstances bring them together after almost a decade apart. How will they overcome the shadows of the past and move forward?

The authors (a group of up to three fans who preferred to keep their names a secret) brought in Morgan Andrews to edit the story, as English was a second language for all of them. Although an author's note stated that a new chapter would be posted in 2016, the remaining team member of the original three replied to a comment in 2017 stating that her pregnancy and lessened interest in hanfic had caused the story to go on hiatus.[1] It remains on hiatus currently.

The Bodyguard won awards in the Blank Page Awards.