One of its foci around 1996 was the fan campaign to protest Lucasfilm and Viacom's actions agains fan websites during one of the Viacom Crackdowns. 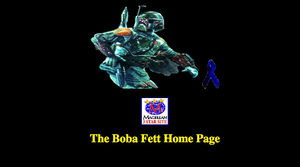 On the weekend of April 13th, Jason Ruspini, creator of the Star Wars Home Page at UPenn, received a phone call from a representative of Lucasfilm LTD. He was told, in no uncertain terms, that because his site makes use of the Star Wars name and various other Lucasfilm trademarks, he would have to shut it down. This representative then went on to say that LFL was actively clamping down on the use of its "intellectual property", and planned to shut down many more fan-created home pages in the next few months.

The Sabacc Home Page and the Boba Fett Home Page believe that Lucasfilm's recent actions are petty and insulting to the average fan. For a company that thrives on creativity and artistic freedom, their new policy for dealing with fan-created web sites is appalling.

According to many Star Wars sources, the Star of Alderaan is the highest honor awarded to heroes of the Rebel Alliance. It was created in memory of the millions killed, when the Imperial Death Star destroyed their planet.

For these reasons, the Star of Alderaan has been chosen as the symbol of protest against Lucasfilm. One web site has already been shut down, and many more will follow. Sites that choose to display the Star of Alderaan will acknowledge the memory of these sites, attesting to the creativity of Star Wars fans, and also show Lucasfilm that their policy hurts the fans, and ultimately, the Star Wars franchise.

How can I show support?

Alternately, if you don't have a web page but still want to show your support, there are other ways for you to do so. If you happen to come across a Star Wars related web page without the Star of Alderaan, let the site maintainer know how he can show his support for the campaign. In addition, you may send e-mail showing your displeasure with Lucasfilm's actions to lucasfilm. Nearly everyone is upset with Lucasfilms' new policy, but please keep all correspondance with them civil and level-headed. Flames and insults will only deepen the rift between us.

With any luck, we'll let Lucasfilm know that we aren't about to take this sitting down. May the force be with us...