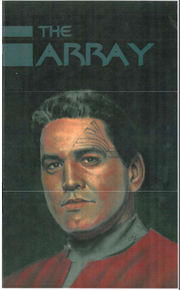 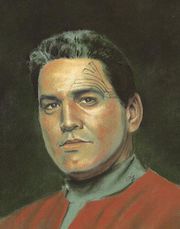 The Array 1 was published in April 2000 and contains 132 pages. Summaries below from the zine's table of contents. 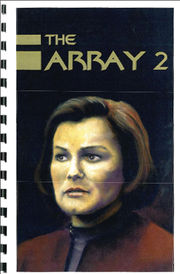 The Array 2 was published in October 2000 and contains 103 pages. Inside art is by Beverly Chick and Zaquia Tarhuntassa.

"The Array 2" is a 104 page VOY anthology of ten short stories, edited by Andra Marie Mueller. I should admit up front that while I do watch VOY, I don't follow the show closely, nor do I read much VOY fanfic. My favorite character is Janeway, followed by Tuvok and B'Elanna Torres. So with my biases in mind, I have to say that I found this collection of stories reasonably well written, well edited, and well presented, but nothing stood out to me as special.

Two of the stories, "Lonely at the Top" and "A Victim of Technology" expressed a lot of writerly resentment toward Janeway for her dalliance with the holographic Michael Sullivan, and indirectly for never having consummated her relationship with Chakotay. In my view, putting that resentment on paper didn't make for particularly compelling stories.

Two other stories, "To Cross the Rubicon" and "Court Marital" provided alternative takes on how the crew might prepare for the potential legal vulnerability of the former Maquis crew members upon "Voyager's" return to the alpha quadrant. An interesting problem to consider, but I'm afraid I didn't find either of the approaches taken convincing. Nonetheless, I can imagine "Court Martial," by Charles H. Shiring, turning up as an actual episode.

My favorite was probably "Loyalties," a pre-"Caretaker" story by Brenda Shaffer-Shiring. The story is about Chakotay as a Maquis leader, and a confrontation with an old friend, now a Starfleet officer. There's some genuine moral wrestling here with issues of loyalty, trust, and friendship. The story is all the more poignant because we know what Chakotay does not: that both Tuvok and Seska will betray him.

In a fun vein, there's Diane Bellamo's , "Temper, Temper"--a nice little character study of B'Elanna Torres. Other stories include an internal monologue for Tom Paris ("A Private Pain"), a study in doctorly regret over a past decision ("And the Truth Shall Set You Free"), and a look at the last weeks of Marika's life ("Hues of Woe or Heaven"). The latter had a lot going for it, but I was handicapped as a reader by not being familiar with the episode it was based on.

The artwork for this fanzine is excellent. The color cover is a portrait of Janeway by Lauren Francis... Again, I'll admit my biases up front: Lauren is a friend of mine, and I'm a big fan of her work. So call me biased, but I think this is the finest portrait of Janeway I've ever seen. There is also top quality black and white interior artwork by Beverly Chick and Zaquia Tarhuntassa.

Overall verdict: "The Array Two" didn't sing to me, but your mileage may vary. If you're a fan of these authors, and/or are of the opinion that Janeway has done Chakotay wrong, then this is a fanzine you might well enjoy. [1]