The Amazing Chan and the Chan Clan

The Amazing Chan and the Chan Clan was a short animated series that ran for one season on CBS in the 1970s. 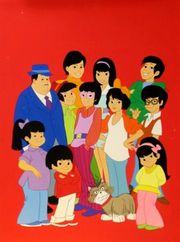 The show was one of many Scooby-Doo knockoffs that aired around that time, only with a larger cast. It was also an animated take on the Charlie Chan mysteries, and the first time an actor of Asian descent played the title character (Keye Luke as Mr. Chan). It ran for 16 episodes and had the same basic format: a robbery or a kidnapping takes place, the kids try to help their father solve the mystery, but Mr. Chan is the one who ultimately has the correct answer.

The family consisted of Mr. Chan and his ten children, plus their dog, Chu-Chu. There was never any mention of the children's mother, it was believed she was either deceased or that she and Mr. Chan were divorced.

The older children also had a rock band, as was the style at the time, and almost every episode contained a musical number. The vocals were provided by Ron Dante, once a vocalist for the pop band The Archies.

There were also four Gold Key comic adaptations of several episodes, plus an original adventure not animated for the series. The show was finally released on DVD in 2012 after a short run on the Cartoon Network subsidiary Boomerang and the episodes only being available on Veoh.

The roles of the children were initially cast with Asian actors, only for eight of the ten to be redubbed with American voices due to audiences reportedly having trouble understanding the dialogue through the original actors' accents.[1] Only Brian Tochi (Alan Chan) and Bob Ito (Henry Chan) remained in their original roles. Anne Chan's replacement voice was a young Jodie Foster, while Stanley's was provided by Lennie Weinrib (the voices for Time for Timer and Scrappy-Doo).

Until around 2010, the series was almost entirely forgotten by fans and had no fandom. A couple of intensely dedicated writers changed this, at least for a few years, by writing a variety of stories meant to take place between episodes and create a more elaborate backstory for the characters. The stories ranged from multichapter adventures with fantastical elements to one-shots that elaborated on the relationships within the family. Fan activity dropped off somewhat recently, but stories do pop up occasionally.

Crossover shipping occurred, as did stories featuring original characters. One longer story even had Mr. Chan marry one-episode character Mrs. Van Inkley, who was written to be a divorceé. Fanfiction often followed the assumption that Mr. Chan was a widower.

Putting a character in danger was a common theme due to the nature of the show, but fanfiction would take it a bit further. Common plot devices involved kidnapping, brainwashing, hypothermia, being stranded in dangerous situations, or illnesses that rendered the character unconscious in bed for days while their closest sibling fretted by their side. Surprisingly, it was tomboy sister Anne who was placed in the majority of these situations as opposed to beautiful Susie or youngest daughter Mimi. Among the boys, hippie Alan or nerdy Tom were the ones to end up in trouble the most.

The show itself had no subtext, but a few incestuous stories have cropped up here and there, or stories that could come off as such due to any given sibling pair being portrayed as much cozier than the usual for siblings.

Outside the fanfiction spectrum, the show did earn its praise from viewers for portraying the Asian cast quite well for the time period; they were obviously of Chinese descent, but behaved like ordinary children instead of ethnic stereotypes. In addition, the characters all fit one archetype or another (the leader, the nerd, the hippie, the tomboy, the clumsy one, the wacky guy, etc) but managed not to come off as too stereotypical and surprisingly relatable.

Criticism for the show consisted of seeing it as just another Scooby-Doo clone with even less of a point. The basic formula was the same every episode, and it didn't last nearly as long as other knockoffs did. The animation was also extremely low-budget and simplistic, even for the time period.