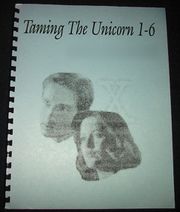 Taming the Unicorn is a MSR het novel by Imajiru. The exact title of this zine is "Taming The Unicorn 1-6."

Summary from author page: "What if... Scully was a virgin?"

The disclaimer: "They're not mine. (Everybody knows that.) I'm not making any money writing fanfic about 'em. (This, too, should be obvious.)"

The rating: "NC-17 MSR. Contains explicit sexual situations, and massive overtones of Mulder-Scully Romance. Not to be sold to minors."

This zine includes only the first six parts of this series.

A sister series is The Unicorn, Tamed.

The Print Zine is a Public Service

This story has been posted to x-files.fanfic@chaos.taylor.edy and alt.tv.x-files.creative, and is available at any of the Gossamer fanfic websites, or at http://members.aol.com/immajer. This fanzine has been printed as a public service for rush-hour commuter & and those who read in the bed or bathtub.

This is a pure MSR story with a twist. Though this twist is not the newest one, other stories have dealt with it too. The twist is that Scully remained a virgin until the very day this tale starts.

Being somewhat surprised as to how it starts off and being pushed into the cold water without any warning, the reader has to adjust to the story. Though, this does not last very long as does the interest one might have in the story. Within the first part the issue is described and somewhat dealt with and then there are 14 other parts! Although, some of them are interesting and hold the reader as a prisoner of them others just don't.

Sometimes I was compelled to just let it go, for I know not why this story got into a list that is called "Classic X Files FanFiction". It is not _that_ good you know!? It is rather standard. Although, one piece was very good for me, the part in which they start to fight because Mulder ran over Scully's foot. Then again, maybe I am just a little bit prejudice to that one for almost the same happened to me not so long ago *however, I did not know the driver of the car before the accident*.

Still, even this part did not last very long and the story moved forward to all too well known territory. Which in itself tents to get old very fast. In the long run I had to realize that the point of view was- in the end- wrong too, because one certain person is telling the story to another certain person and this just does not add up to a narrator in the third person....

The best parts were those in which both of them fought, for whatever ridiculous reasons (although the foot was a good reason ;) ) Yet, the last part with all those rules is somewhat funny too.

Altogether, this story does not belong into the category of 'classics', despite the fact that I would not know if I could do it any better. Although, I am not sure if I would attempt to write a story in which either of them is a virgin until her/ his thirty + birthday in the first place....

I for one have read better stories which are not mentioned in this list of classics.... [1]

Laugh all you want, but I'll admit, I've always had kind of a soft spot for this series. Yeah, it's smushy, completely implausible, hopelessly romantic, but hell, even my black heart needs a -little- silly schmoop every now and then. And, yeah, it's MSR, and gets to be a bit too much at the end, but the first few books are still *lots* of fun. Check it out. Rating: 4 Flashlights overall [2]

This was written sometime around the third season of The X-Files and won a 1996 Spooky Award. Mulder and Scully have a bit less baggage here, which makes for a happier story. If you watch the first three seasons and wish for a happy ever after ending with those characters, this is your story. The premise: Scully is a virgin and makes a bet with Mulder that it's possible to have a sexually satisfying relationship with a virgin. She wins the bet in the first chapter, making the flabbergasted Mulder "her slave for life." The story and the relationship evolve from there, towards the happy ending, as both grow and commit to one another romantically.[3]