The Supernatural Femmeslash Big Bang was a big bang challenge in Supernatural focused on femslash pairings. Writers had to write a story that was 10,000 words, artists could create banners, posters, wallpapers, icons, videos, traditional art and fanmixes.

Title: But It Never Gets Dull
Author: feathertofly
Artist: familiardevil
Pairing(s): Sandy McCoy/Danneel Harris
Rating: R
Summary: Sandy McCoy first met Danneel Harris at her callback for the role of Samantha Winchester in the new HBO thriller Supernatural. She had been hoping for a job, but had no idea she would be getting a best friend and roommate as well. Because that’s what they are, right? Friends?

Rudely introduced to the supernatural world by a ghost from her past, Kathleen ends up working with Jo to put the disturbed spirits at rest, and takes off after Jo to join her on the road, hunting evil and learning the ropes. Jo wonders if she should be replacing one authoritative older woman with another - but Kathleen is different, and fascinating.

Their bond changes into something unexpected and more than a little scary for Jo, but it becomes worth it - until a hunt goes south, and they both have to examine just what they have and what they mean to each other.

Title: Honey and the Hive Queen
Author: bree_black
Artist #1: dress_myself_up
Artist #2: tringic
Pairing(s): Jo/Madison, mentions of canon ships, implied background Dean/Castiel (if you squint).
Rating: R
Summary: It ends with Sam Winchester putting a bullet through her heart – or, that’s how it’s supposed to end. As it turns out, death is only the beginning for Madison Owens, and heaven is nothing like she expected. Somehow, she finds herself recruited into a band of rebels – a dead psychic, a dead FBI agent, a dead salesman, and two dead dorks, all working to take down heaven from the inside. But the most bewildering part of all is Jo Harvelle, their beautiful – and only slightly scary – leader. So much for eternal rest – between the fight against the angels and her new feelings for Jo, Madison has never felt more awake.

Title: All Things Golden and Green
Author: sparrowshellcat
Artist: karahalliwell
Pairing(s): Jo/Jess, Jo/Ruby, Jo/Meg (implied), Bela/Lily, Jake/Ava
Rating: R
Summary: When Jo Harvelle wakes up in the hospital, she discovers she can't quite remember who she is or why she's there. Slowly, she starts to feel more like herself, but she also starts to fall more and more in love with her personal nurse, Jess. But just when her life seems to be going on a definite upswing, she starts to remember disturbing things that she shouldn't remember. 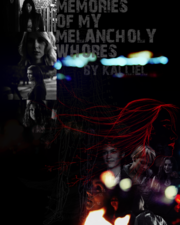 Cover Art by _afterism for Memories of Melancholy Whores

Title: Memories of Melancholy Whores
Author: kalliel
Artist: _afterism
Pairing(s): mostly Meg/Lisa, Meg/Bela, Meg/Jo (peripherally, Meg/Jess, Meg/Dean, Meg/Sam, Meg/Amanda Walker (1x04), Meg/OFC, Dean/Lisa)
Rating: R
Summary: She can feel the callus forming on her thumb, from the rough hilt of the (her?) blade, if she tries hard enough. And sometimes she does—try, that is. It's like pressing a bruise. It's like pounding against a bruise until you split open and you start falling out of your own skin.

Like your bruise is your entire world; you see in shades of black and purple and sometimes plum-red. You are a millimeter from the walls in any direction. And you're pressing at that bruise; the small coin-shaped one at your elbow, waiting for it to blossom before you, so you can feel something—anything—at all. More often than not, what you feel is cooling blood, sticky between your fingers.

On possession and being possessed: How to love your body (or someone else's). How to survive an encounter with a demon (or a human). And how to survive the Winchesters, no matter who you are.

Title: And Sing of Sweet Surrender
Author: sparrowshellcat
Artist: dress_myself_up
Pairing(s): Jess/Meg, Jess/Jo
Rating: R
Summary: Everyone knows what happened when Jess died. What no one knows is what happened after. So begins a fanfiction written by Jude Applegate about the untold story of what happened to Jessica Moore from Carver Edlund's Supernatural books after her death. A fanfic she doesn't really know why she's writing, and no matter how much she tries to control it, she has no idea why her characters most definitely have a mind of their own.

Jess rises from the grave, and sort of tumbles into the hunting lifestyle, which also seems to include the bed of a woman named Meg, then later, to tumble headlong into a relationship with a wiser hunter than she, a woman named Jo. And then an angel tells her why she's alive - to save the world... by saving Sam.

But it's just a fanfiction, right?

Until Chuck writes a scene in his most recent novel where Jess appears, and figures out exactly what is going on.

This is Jude's fanfic... and it's also the Acts of the Apostle Jessica.

Title: pink, satin and pearl
Author: annabeth
Artist: tequilafish7
Pairing(s): Jess/everyone (all girls); always-a-girl!Sam/Dean [not related]; Jess/Jo; Ruby
Rating: NC-17
Summary: Jess has been a hunter since she was a little girl, growing up in close quarters with her as-close-as-a-sister Jo Harvelle at the Roadhouse. But a misunderstanding between Jess and Jo sends her off on the road by herself, searching for a purpose in her life and a distraction from her heartbreak.