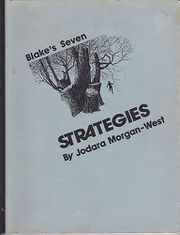 One fan described it as "an Avon redemption story hot enough to melt iceburgs."

The copy I have is neatly produced. Quarto, double column layout, velo bound and with pleasant black and white artwork. The writing is good and contains no glaring errors.

Vila, Cally and Jenna plot together to get Avon a break. All that unreleased sexual tension is making him a right pain and they're getting fed up of him. They trick him into staying at an extremely posh brothel where he proceeds to have a wonderful time and has a romance with the owner of the brothel who turns out to be a psychostrategist with rebel tendencies. Servalan eventually appears to cause problems, which merely allows Avon some bunus entertainment.

The characters are intelligently written; there's plenty of detailed and enthusiastic sex, and for anyone who likes het sex stories, this zine is probably worth tracking down. [1]

I am constantly on the lookout for B7 adult material of the heterosexual variety, a quest not as difficult as it'd be in say. Professionals or Wiseguy fandom. but not dead easy, either. Knowing my taste, a friend of mine lent me a copy of the zine, Strategies.

The plot, such as it is, goes like this: The second series crew, sick unto death of Avon's increasingly bad temper, conspires with Orac (who just wants peace and quiet) to send Avon down to a pleasure palace, which they hide under the pretext of shipping him to an important computer conference. There he is ministered to by a Dominant Female known as the Red Queen, who is actually a former psychostrategist. She is understandably fascinated with Avon and decides to take a cruise through his psyche, as well as enjoying his more corporeal charms.

The cruise is couched in terms of Jungian archetypes and is interesting, though not overwhelmingly insightful (and I'm not sure it's really meant to be). But still, there's a nice glimpse into one version of Avon's past, as well as the whys and wherefores of his second-season behavior and conflicts with Blake.

The sex overall is fairly explicit and sensual, though it varies according to the scene and the people involved. Some of the early sex on Avon's part is hallucinatory, which makes it actually more interesting, since it reflects his state of mind and preoccupations. The others characters are not neglected, though, and there is plenty of recreation going on back on Liberator, while Avon is otherwise occupied The most sensual section of the novel, however, deals with Avon and the psychostrategist as they establish a relationship in the second half of the novel...the author's heart (and etc.) is obviously in the writing here. It's sexy and it's tastefully explicit and anyone who likes both Avon and het scenes will probably enjoy this section...well, make that definitely.

The novel also contains a fair amount of humor: My favorite scene of this sort is one where the Red Queen is reciting a list of kinky sex scenarios Avon might want to indulge in and Avon's reaction (which is hilarious) roughly translates to: "Get out of here; are you crazy?" I also liked Avon and the rubber duck.

I have a few quibbles. The Red Queen is a little too talented, insightful and general competent at every little thing she touches... I won't utter the dreaded M.S. word, but it's very close at some points in the story. Also. Avon is a latent telepath in this novel and I can't begin to express how little I like this fannish cliche', not to mention how thoroughly 1 don't believe it. However, that element isn't so intrinsic to the plot that it spoiled my overall enjoyment of the story.

But those are relatively minor quibbles. As I said, the sex is genuinely sexy in the second half of the novel, especially in scenes with Avon/the Red Queen and Avon/Servalan. and the plot becomes more coherent and sensible in the second half, as well. And I found the end genuinely rather touching. Also, this is perhaps the only fannish work I've read thus far where Avon utters the word "love" and I didn't get instantly nauseous. That's a feat.

Strategies isn't a fannish classic. IMHO, but it's an appealing, fun. and basically well-crafted romp. If you like het sex and Avon, it's worth finding a friend who can lend it to you. [2]