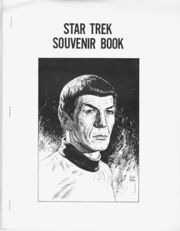 Star Trek Souvenir Book contains 16 pages. It has a cover by Joyce Huser, a three-page interview with Leonard Nimoy reprinted from the July 13, 1973 issue of Los Angeles Free Press and a reprint of 10 pages of British Star Trek comics.

Published for the fourth Miami Star Trek Convention, held on May 5, 1974.

When we held our first STAR TREK CONVENTION of February 17th of this year we really had not planned on holding another until at least June or even later. However the response was so overwhelming and the demand was so great that we moved the date up to today, May 5th. We had a total attendence last time of 448, which was astounding, to say the least. Because of that huge attendence we were able to spend more on this convention, as witness by this larger Souvenir Book and the Doorprizes. In all honesty though, we really do not expect that many people today. However, if we can average 200 or more people each time, we anticipate having enough revenue to make each convention better than the last.

But it takes more than money to make a good convention--it takes new ideas and suggestions, and that's where you come. These conventions are held for you and we want to hear from you. We want to try new things and have new and different activities and if you have some ideas and suggestions we want to hear from you. Just write us at the address below. And, as we mentioned last time, we need people on campus who can help us distribute our flyers.

Just when the next Star Trek Convention will be held, is uncertain right now. Probably in July or August. At any rate, if you want to receive information, and you are not already on our mailing list, just send us your name and adress [sic].