Star Sector One and Star Sector Two are gen Star Trek: TOS digest-sized anthologies. The contents of both issues were written, drawn and created by members of the United Federation of Trekkers. The first issue was meant to be a single, stand-alone one-shot publication and the "One" in the title referred to the fictional section of space in the Star Trek universe in which Earth is located; it was not meant to be an issue number. "Star Sector Two" was so named to be consistent with the first publication, with the word "Two" also being an integral part of the name, not an issue number. In other words, it would be incorrect to think of these publications as "Star Sector #1" and "Star Sector #2."

Star Sector One is a saddle-stitched mini-zine edited by Eric L. Watts and published in 1980 by the United Federation of Trekkers that contains 48 interior pages plus covers. Eric L. Watts is the front cover artist. It was originally meant to be a one-shot. [1] 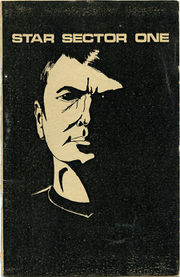 Cover of Star Sector One, art by Eric L. Watts

Star Sector Two is a comb-bound mini-zine edited and published in 2003 by Eric L. Watts and contains 72 interior pages plus covers. Bryon Barnette is the front cover artist. 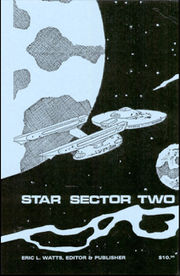 The editor explains the gap in time between the two issues: "Following [Star Sector One's] publication, I collected manuscripts, artwork and other material for STAR SECTOR TWO, but financing for the second issue never materialized before the UFT sputtered out of existence in 1989. Years later, in 2003, I took the old typewritten manuscript for STAR SECTOR TWO, totally rekeyed it into my computer and published it as a fundraiser for TrekTrak, the track of programming devoted to Star Trek at Dragon*Con of which I was director from 1993 to 2009." [2]